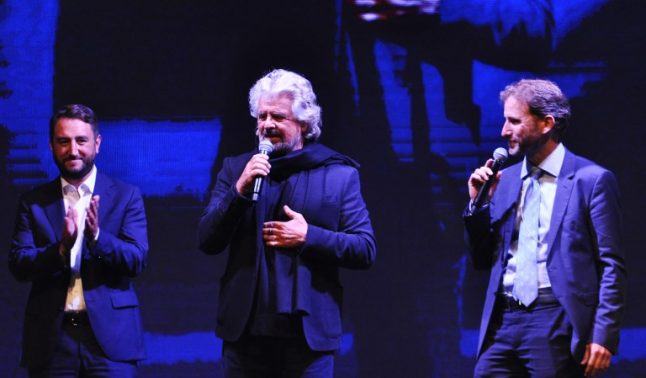 Five Star Movement leader Beppe Grillo (C) addresses supporters of candidate Giancarlo Cancelleri (L) upon regional elections in Sicily, on Friday in Palermo. Photo: ALESSANDRO FUCARINI / AFP
“The vote is considered decisive not just by the party leaders pounding the streets of the main cities, and not just for the island's future, but for the future of Italy and even Europe,” editorialist Marcello Sorgi wrote in La Stampa daily.
A victory in Sicily would give M5S its first region, a boost supporters say could propel it all the way to national leadership.
“The choice is simple: us or them, the future or the past, hope or failure, citizens or traditional political parties”, comedian Beppe Grillo, the movement's outspoken founder, wrote on his blog.
M5S candidate Giancarlo Cancelleri, 42, is expected to have just one real challenger for the victory podium: Nello Musumeci, 62, who was leading the race in recent opinion polls and could snap up the region for the right.
A bitterly feuding left is expected to fail to get anyway near the top.
Analysts say the political dynamic on the Mediterranean island mirrors the situation nationally, and the vote is being closely watched in the eurozone's third-largest economy for indications of how the general election, due before May, will go.
Polls close at 10pm and  votes will be counted on Monday.
“The polling stations open under a dark cloud, amid controversy over the risk of vote-rigging,” La Repubblica daily said, referring to claims the decision to wait overnight before beginning the count increased the chances of fraud.
The interior ministry was tightening controls in response to the fears, it said.
All eyes were on turnout figures, with low participation known to have rewarded M5S in the past. Only 47 percent of Sicily's eligible voters turned out for the last regional election in 2012, a record low. By midday, only 10.8 percent of voters had cast their ballots — down nearly half a percentage point from the same time at the last election.
'Enemies at the door'
A victory for Musumeci could be a boost for billionaire former premier Silvio Berlusconi, who recently shrugged off scandals to return to the political fray, portraying himself as a pro-European moderate and the only real defence against populism.
His centre-right Forza Italia (Go Italy) party joined forces with its traditional rightist allies the Northern League and the Brothers of Italy for the Sicily vote — a powerful combination which pollsters say could steal the show at the national elections.
The anti-immigrant Northern League, meanwhile, sees Sicily as a testing ground for expanding its reach beyond Italy's northern regions.
But the ruling Democratic Party (PD) is braced for an embarrassing defeat that could have serious implications not just for the left nationally but also for Matteo Renzi, the former prime minister who wants his old job back.
“Renzi is preparing for the probable Sicilian nosedive like a man whose enemies are at the door and the supplies are running out,” political commentator Tommaso Ciriaco said in La Repubblica daily.
The 42-year old has been accused of causing a debilitating rift in the left, and has largely abandoned the party's candidate, Fabrizio Micari, 54, on the campaign trail.
The worst case for the PD would see it beaten by Article 1 – Democratic and Progressive Movement (MDP), formed in early 2017 by a leftwing split.
The MDP's Claudio Fava, 60, was nipping at Micari's heels in the latest opinion polls, with just two percentage points between them.
By AFP's Alessio Tricani with Ella Ide in Rome