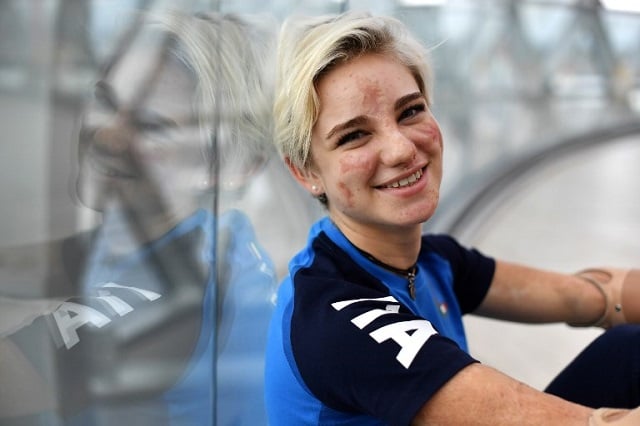 Now the 20-year old ace is in Rome, where on Wednesday she will defend her title as wheelchair fencing world champion after taking home gold in last year's Paralympics in Rio.

“My motto is, 'life is too good',” Beatrice Vio said with a laugh in an interview with AFP, her cheerfulness belying years of physical and psychological anguish, beginning in 2008.

“I was 11 years old when I got sick. I was struck down suddenly with meningitis C,” said the blue-eyed blonde from northern Italy, who has been affectionately nicknamed “Bebe” (baby) by her compatriots.

“Two years earlier, my mother had asked a doctor if I should be vaccinated because a child who lived near us had meningitis, but he said I was too young and not to worry,” she said. The disease become necrotic, giving her doctors no choice but to amputate both legs and forearms.

It also ravaged her face, leaving it deeply scarred. Several months of intensive rehabilitation in hospital followed, during which Vio learned to walk again using prosthetic limbs designed specifically for her.

The youngster had first wielded a sabre and donned a mesh mask when she was five years old.

“After a difficult time, it was my dream of fencing again that helped shorten my hospital stay,” she said.

“I also had the support of my father, who worked with a specialized orthopaedic centre to develop the prostheses with which I was rebuilt — a bit like a lego,” she joked.

The world's first competitive fencer with no arms or legs, Vio uses prosthetic arms but standard foils or epee weapons. While she can walk almost normally on her prosthetic legs, she competes in a wheelchair.

“I found hospital to be a waste of time,” she said. In under four months she was back at school, and entered her first parafencing competition just a year after falling ill.

She puts her return to “normality” down not just to tenacity but also two decisive encounters, with South African paralympic athlete Oscar Pistorius and Italian paracyclist Alessandro Zanardi. “They both said the same thing: 'You're an amputee, don't let it stop you. Get moving and do what you want to do',” she said. “I met them thanks to my parents, and now I tell myself I'm the one that has to be an example to others”.

Already a household name in Italy, Vio's popularity soared after Rio, where she was the flag-bearer for the Italian delegation at the Paralympic Games' closing ceremony.

Invited on an official Italy-US visit to the White House last year, she snapped a cheeky selfie with Barack Obama. She puts her fame to good use, supporting the art4sport association — which helps young disabled people play sport — and campaigning in favour of vaccines, a hot-button issue in Italy.

“I'm fighting for everyone, children and adults, to be vaccinated. It's an easy thing to do and can avoid a lot of ball-ache,” she quips.