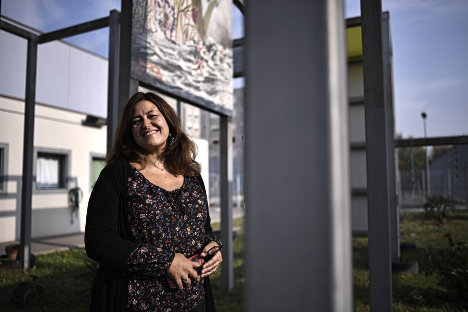 Dafne Guida, director of the nursery at the Penitentiary of Bollate. Photo: Marco Bertorello/AFP

Located in the grounds of Milan's Bollate prison, the kindergarten welcomes the children of detainees, guards and local residents to what staff describe as an innovative and successful social experiment.

Opened as part of new facilities to improve the wellbeing of staff, the creche was initially little used with prison employees seemingly reluctant to switch from their established childcare arrangements, prison governor Massimo Parisi told AFP.

As a result, he decided to open it up to the public to an unexpectedly enthusiastic response from the prison's neighbours.

“It was a big surprise for us, the families round about reacted in a very positive manner and started to bring their children here.

“It was a real breakthrough in terms of overcoming prejudices because obviously there is something quite novel about the idea of bringing your children to a prison.”

The arrival of the local kids created a positive effect, their presence making the nursery more attractive for staff.

And since December, the prison has opened a new section to accommodate female inmates and their very young children, who have also joined the thriving creche.

“This mix, with no distinction made between the children, seemed like an original idea that sends a wonderful message about integration and breaking down walls,” Parisi said.

The nursery brings in experts to organise nature and animal-based activities, making use of its large garden and play areas.

On the morning AFP visited, the smaller children played with a dog while another group were introduced to the world of horses.

Local mother Federica Ridolfi admits she was hesitant about enrolling her son to begin with.

But her doubts “soon disappeared when I saw the building and the garden and I came to understand the project”.

“Even if it is a prison creche, you don't need to actually go into the prison or through any controls,” she added, explaining that the nursery has its own entry.

Simona Gallo, a prison educator, has opted to put her twins into Biobab for the “peace of mind” that comes with having them close to her.

“Bringing children with different backgrounds and life experiences together is enriching,” she says.

“And I also think it's important that the children of prisoners, who have not committed any crime, can spend time in a 'normal' environment.

“That is also the sense of my work, the aim of prison after all is rehabilitation.”

Bollate prison, located on the outskirts of Milan, is known for its innovative work in this area, notably through its prisoner-staffed restaurant “In Gallera”, which is open to the public.

In a sign of its success, the 24-place nursery is currently full.

Eight places are taken by children from outside the prison, between two and five by the toddlers of prisoners, and the rest by the staff's youngsters.

“From a co-existence point of view we have not had any problems with the parents and even less so with the children,” says Dafne Guida, director of the Stripes cooperative which runs the facility.

For prisoners' children, the nursery offers enormous stimulation that helps to offset the potentially negative developmental impact of having a mother in detention, she says.

“We guarantee that they can socialise and have a much more structured experience from a cognitive and educational point of view.”

Guida's colleague Valeria Caenazzo said the prison educators had noted a significant improvement in the children's behaviour and interaction with other kids.

“As there are only a few of them in prison, being able to play with lots of other children is very positive.

“And when we go into the prison with photos and films to show the mothers the progress they've made, you can see their eyes light up watching their kids doing the same stuff as all the others.”