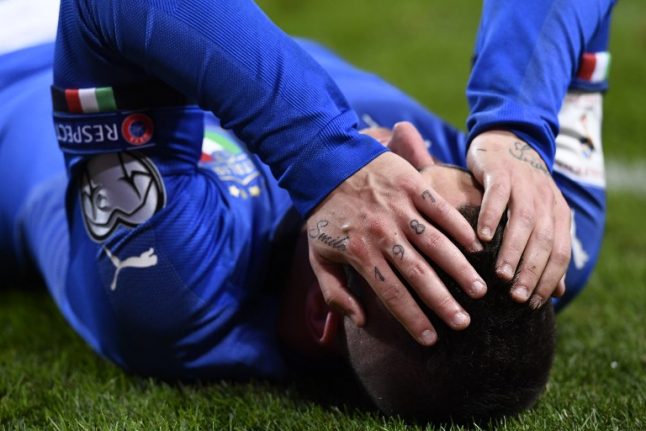 Italy need to overturn a 1-0 play-off first-leg defeat against Sweden at the San Siro in Milan on Monday night.

National coach Gian Piero Ventura insists his team will not falter but the 69-year-old gave his critics more ammunition in the build-up to the game by claiming he was “amazed people are surprised we're in the play-offs”.

“We knew from the moment we picked Spain in the group phase that we'd be heading for the play-offs. Nobody can be surprised we reached this point.

“I realise this is the way it works in Italy, but I didn't expect all this,” he added of the reaction generated by the humiliation of an impending exit.

“We started out with people talking about the apocalypse.” Italy were second to Spain in the group phase and never recovered from their confidence-denting 3-0 defeat in early September in Madrid.

Ventura has come under fire for stubbornly sticking to a failing tactical system and overlooking talented Napoli forward Lorenzo Insigne, 26.

The Italy coach blamed bad luck and the referee for Friday's defeat in Stockholm.

“The first-leg performance shows that we are perfectly capable of overturning the 1-0 result.

“We analysed the things that went well and others that did not go so well. I'm fully aware that this game is fundamental for us, but it's the same scenario as when I first signed to lead the national side,” he continued.

“We will change something, because only 48 hours have passed. We hope that it'll be change for the better.” Marco Verratti is suspended for Monday's game with defender Leonardo Bonucci wearing a protective mask after breaking his nose in a bruising first leg against Sweden in Stockholm.

Veteran Andrea Barzagli called for Italians to get behind the team and Ventura.

“We need action and not words now,” the 36-year-old Juventus defender told Rai Sport. “It's part of the game for people to discuss tactics and formations from the outside, but the only thing that counts is what the coach decides, both for the players he picks and the shape.

“We must all be on the same page, all of Italy united, as at the end of the day we all want to go to the World Cup in Russia. Unity is essential right now.”

Captain Gianluigi Buffon, like Barzagli a veteran of the 2006 World Cup-winning campaign and looking to avoid an inglorious end to his Italy career, admitted the team were under pressure as they carry the weight of national pride.

“It is certainly a moment of high tension, considering what is at stake and the sense of responsibility each of us must bear,” said Buffon, who will earn his 175th cap in the San Siro.

“It is an important game for the history of our national team. The only thing that I would have would be a personal satisfaction, but in the wider scheme of things, I am irrelevant.”

He added: “We want to send Italians a message not with words, but with action on the pitch. We invite them to support us, but realise the time has come for us to show them what we've got.

“I would love for those who come to the stadium tomorrow to take off their club colours and all wear the Azzurri jersey that unites us all.”

Sweden – runners-up in 1958 – are desperate to return to the world stage after missing the last two editions.

And captain Andreas Granqvist believes they can cause a big upset in front of over 65,000 Italians.

“The pressure is all on them,” said the former Genoa player. “Italy are a great nation that has almost always played the World Cup. We have nothing to lose and we will go onto the pitch to give a great performance.”