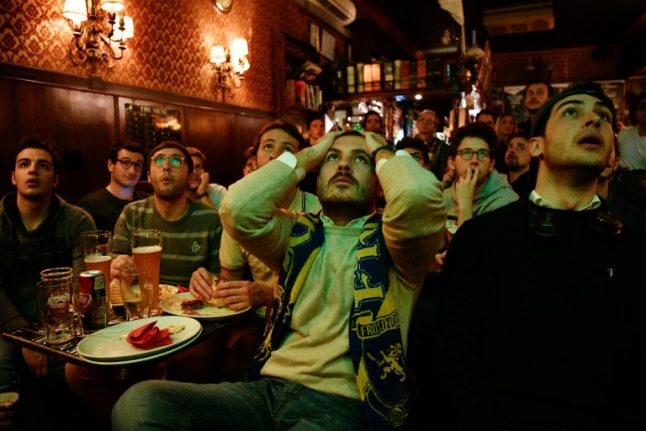 Nearly 15 million Italians tuned in on Monday night to watch their team crash out in a 0-0 draw with Sweden, who went through on their 1-0 victory in the first playoff.

The result led to tears, tantrums and recriminations in Italy, where football is a matter of national pride.

Whether they get your sympathies or your Schadenfreude, here are a few of the ways Italy has been mourning its lost World Cup hopes.

In Rome’s San Lorenzo district, the Le Mura bar, which showed the match on a big screen, emptied at the final whistle.

“It is really very sad because watching the World Cup was something that really brought us together as Italians,” recent graduate Stefania Pusateri told AFP. “But what is sure is that the shock will be even worse for my father. He is 54 years old and he has never had to go through something like this.”

Sitting alongside Pusateri, Davide Penna concurred. “I still can’t believe it has happened,” he said. “We have never experienced anything like this. It's over.”

‘The umpteenth failure of our country’

“I am disappointed with the whole football system in Italy,” said Mirko Palmieri, a fan who watched the defeat in person at the San Siro stadium in Milan.

“It is the umpteenth failure of our country. Even here, we can't get the job done.”

Another fan added: “The disappointment is a double one – first because we are not good, but second because we were beaten by a team that is even worse than us.” Italian football ain’t what it used to be

“The truth is we haven't replaced the players we had in the past,” young Roman Carlo told AFP the morning after.

‘A very sad day for sport’

“It's clear we must rebuild the world of football and that we have to make decisions that we may not have had the courage to take in recent years,” said Lotti.

“We did not discover the problems yesterday. We have been eliminated in the group phase of the last two World Cups. There is so much to do, now we must take this opportunity to rebuild Italian football from youth level up to Serie A.”

‘The biggest Italian sports catastrophe of the last 60 years’

“It's the biggest Italian sports catastrophe of the last 60 years, which cannot be blamed on the coach,” former Rome mayor Walter Veltroni told Rai Radio 1, suggesting a total clearout of the hierarchy. “The results are missing at the national level, clubs, from grassroots level basically. There is a problem in Italian football, that concerns the management, down the ranks.

“A new president, a new coach, are needed. After [Alessandro] Del Piero and [Francesco] Totti there is a fundamental problem in Italian football lacking authority.”

“As you know, it's up to the boss to take responsibility. If I were him [Tavecchio], I'd resign,” said Giovanni Malago, the president of Italian Olympic Committee CONI.

“Italy, this is the apocalypse,” ran a headline on the website of sports daily Gazzetta dello Sport.

The other major sports daily, Corriere dello Sport, headlined with: “Italy out of the World Cup”. “In only a few months time we will be watching the World Cup for everyone else: for the first time in 60 years we will be on the outside,” the daily noted in an editorial piece.

“It is an intolerable football shame, an indelible stain.

“It is over. Apocalypse, tragedy, catastrophe.”

An online headline in La Repubblica read simply: “Goodbye Russia”, while Turin’s La Stampa proclaimed: “Disaster for Italy, we won’t be going to the World Cup.”

The economic fallout of defeat was immediately felt with shares in the Gazetta dello sport plummeting on the Milan stock exchange.

Shares were suspended in the middle of the afternoon after dropping 8.83 percent.

“The fact that Italy will not participate in the World Cup is a new negative for the media sector,” said analysts Equita of the global showcase, which “attracts important advertising revenue”.

You’d have to have a heart of stone not to feel for ‘Gigi’ Buffon, Italy’s legendary goalkeeper who was hoping for one last World Cup before he retires at the age of 39.

Alas, his international career ended not with a trophy but with tears on the sidelines.

Gianluigi Buffon: 'This was my last game for Italy. I'm sorry. We are sorry' ? . This is heartbreaking pic.twitter.com/4Yyk9vRIwj

“I’m sorry,” Buffon repeated as he wiped his eyes after the match.

“I'm not sorry for myself but all of Italian football, because we failed at something which also means something on a social level.”