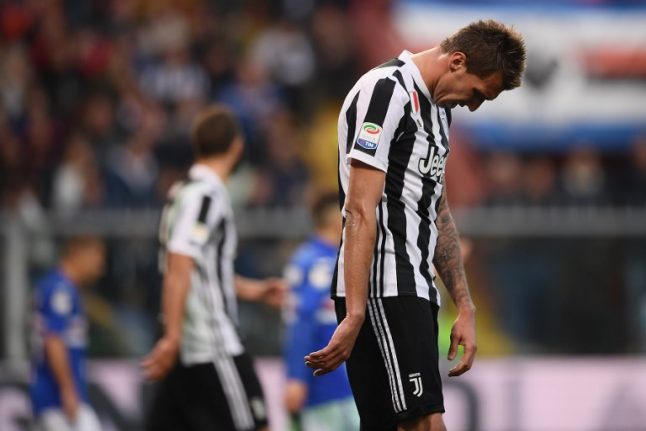 Captain Gianluigi Buffon and defender Andrea Barzagli were rested by Juventus in the wake of Italy's World Cup exit as the Serie A champions lost 3-2 at Sampdoria on Sunday.

Juventus were three goals down heading into injury time after Colombian Duvan Zapata, Uruguayan Lucas Torreira and Italian defender Gian Marco Ferrari scored in the second half for the Genoa side.

The six-time reigning champions got two back in stoppage time with Gonzalo Higuain scoring from the spot and substitute Paulo Dybala grabbing a second just before the final whistle.

But Juventus fell to third position four points behind leaders Napoli – 2-1 winners over AC Milan on Saturday – with Inter Milan moving second thanks to a Mauro Icardi brace in a 2-0 win over Atalanta.

Napoli have 35 points from 13 games, two points ahead of Inter, with Juventus on 31 and Roma fourth a point back with a game in hand, after beating Lazio in a pulsating Rome derby on Saturday. “This was an unexpected slap in the face,” said Juventus coach Massimiliano Allegri.

“Today's game is one of those that happen once in a year, it's a difficult game to explain and that leaves you a bit gobsmacked.

“We should have been patient, even if things weren't going our way. It's a long game, you have to stay calm.”

The Turin side had the better chances early on with a Higuain shot deflected wide and Mario Mandzukic and Juan Cuadrado forcing saves.

Sampdoria's movie producer president Massimo Ferrero likened the victory to that of “a Fiat 500 over a Ferrari”.

“Mr Buffon said that other teams tend to get out of the way of Juventus, well, today he and his Juventus got out of our way.” Barzagli and Buffon on the bench. Photo: Marco Bertorello/AFP

Allegri took a risk as he rested goalkeeper Buffon and defender Barzagli with Dybala starting on the bench against a side who have made their home ground a fortress this season.

“Buffon and Barzagli are getting over the [World Cup] disappointment,” explained Allegri.

“After 15 days with the national team with enormous pressure, it's just right to rest.

“It's football, it's another drama, an extraordinary event that has unfortunately left Italy out of the World Cup, but we know how to get up and start again.”

Sampdoria kept Juventus pinned back in the first half with Zapata breaking the deadlock when he headed in after a Federico Bernardeschi error on 52 minutes, with Torreira firing in the second on 71 minutes and Ferrari a third eight minutes later.

Juventus were awarded a penalty after Ivan Strinic fouled Douglas Costa with Higuain getting the visitors' first on 91 minutes, while Dybala added the second in the final act of the game.

It was Juventus's second league defeat of the season after Lazio, and a blow for Allegri's side as they prepare to face Barcelona in the Champions League next Wednesday. Lorenzo Insigne washed away his World Cup woes on Saturday by starring in Napoli's victory over a struggling but spirited AC Milan.

Milan coach Vincenzo Montella remains under pressure despite a strong second-half performance as his side stay seventh on just 19 points, after their sixth defeat in 13 games.

Roma beat Lazio 2-1 in an enthralling Rome derby thanks to goals from Diego Perotti and Radja Nainggolan.

Ciro Immobile pulled one back from the spot with 18 minutes left after Kostas Manolas' handball was spotted by the VAR, but Roma held out for a huge win over their local rivals.

Luca Rigoni's first-half goal got new Genoa boss Davide Ballardini off to a winning start with a 1-0 victory at Crotone on Sunday.

But promoted Benevento suffered their 13th defeat in as many games, falling 2-1 to Sassuolo, to set a new European record.

The side from outside Naples eclipsed Manchester United, who lost 12 matches in a row at the start of the 1930-1931 season.