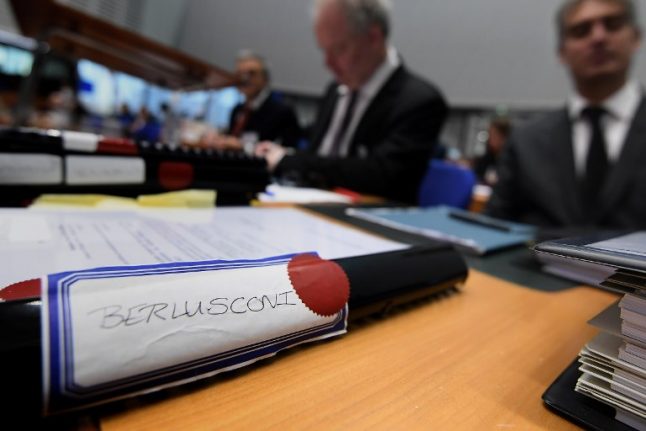 Lawyers for Silvio Berlusconi prepare for the opening hearing at the European Court of Human Rights in Strasbourg, France. Photo: Frederick Florin/AFP

His lawyers appeared at the court in Strasbourg in France on Wednesday to argue that applying an Italian law that bans convicted felons from public office to Berlusconi – who was found guilty of tax fraud – is unfair, since the law was adopted after he committed his crimes.

He was therefore subjected to a harsher penalty than he would have faced at the time of his wrongdoing, they said.

Throwing Berlusconi out of office was politically motivated, his legal team also claimed, comparing the senate vote that expelled him to “a Roman amphitheater in which a majority of thumbs down or thumbs up decide whether one sinks or not”.

Lawyers for the Italian government, on the other hand, argued that Berlusconi’s punishment was fully in line with the law.

Senators voted to strip Berlusconi of his seat in late 2013, after Italy’s highest court upheld his conviction for tax fraud.

He was first found guilty in 2012, in connection with offences dating back to the 1990s, and sentenced to four years in prison (later commuted).

After Berlusconi lost his final appeal against his conviction, under the terms of the new law he was expelled from the senate and banned from running for office until at least 2019.

That rules him out of Italy’s next general election, which is due to take place in spring 2018.

Yet Berlusconi, who has spent recent months assembling an alliance of right-wing movements around his Forza Italia party, has made it clear that he hopes to play a decisive role in Italy’s next government.

The human rights court is expected to take months to rule on his case, making his chances of being cleared to run in the election slim.

But “I will be on the pitch, as captain or coach,” Berlusconi said last week.

“I hope that the Strasbourg court will accept my appeal,” he wrote on Twitter on Wednesday. “But my role in the next electoral campaign is clear regardless: I will be in the field looking to take the centre-right into government.”

Berlusconi did not appear at Wednesday's hearing, which was expected to be brief.

If the court's 17 judges find that his treatment violated the European Convention on Human Rights, they can instruct Italy to take action to bring it back into line with the EU’s standards.