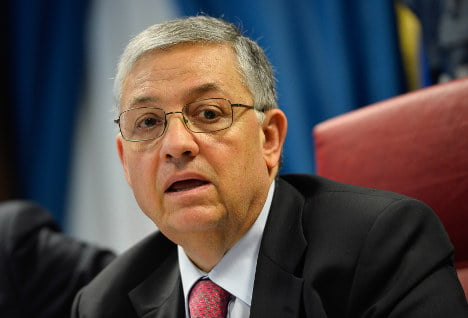 Rome prosecutor Giuseppe Pignatone has urged the government not to change the law on the mafia. Photo: Andreas Solaro/AFP

The legislation in place is harsh but effective — the problem is a “mafia culture” which has infected society, they say.

Here are five suggestions for winning the war:

Pier Paolo Farina, a young sociologist and founder of the Wikimafia news site, said “all the mafia fight needs is for everyone to be aware of the issue and do their jobs,” from minor officials to political leaders.

“We no longer need heroes but citizens who do their duty and respect the laws because they are aware of the value of legality,” said Rosy Bindi, the head of parliament's anti-mafia committee.

The mafia thrives by stepping in where the state is failing, offering security, employment, housing and even rubbish collection. New recruits in poor areas often feel a life in crime would give them a future the state cannot.

“As long as there is no Marshall Plan for the (poor) south,” there will be room for organised crime, Palermo prosecutor Roberto Scarpinato said.

Italy's mafias have business ties everywhere there is a strong expat presence — from European countries to North and South America and Australia.

Prosecutor Nicola Gratteri said Italy must push for greater international coordination and draw up more bilateral agreements. “We signed one with Colombia, but you can not imagine what the 'Ndrangheta is doing in Peru.”

Pietro Grasso, a longtime anti-mafia magistrate, called on Italy to draw on the network of anti-organised crime groups that have been valiantly drumming up resistance for the past 25 years and “which show that another way is possible”.

“I would be grateful if this parliament and the next did not change the law on the mafia,” Rome prosecutor Giuseppe Pignatone told a major two-day conference on the fight against organised crime in Milan.

Prosecutors up and down the country fighting the 'Ndrangheta (based in Calabria in Italy's deep south), the Camorra (Naples), Cosa Nostra (Sicily) and Sacra Corona Unita (Puglia), say each tweak to the law slows their work, he said.