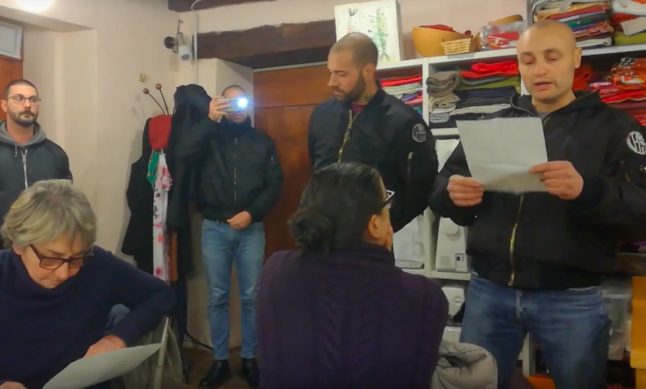 A screenshot of a video showing skinheads at a meeting of Como Senza Frontieres. Via ecoinformazioni arci/YouTube

The group of around 15 men, who said they belonged to a group called Veneto Fronte Skinheads, interrupted members of Como Without Borders, a network of associations that help migrants and refugees in northern Italy, as they met in a local community centre.

Amid awkward silence, he claimed that European people were being “replaced” by “non-people” and denounced those who assist migrants as “proponents of immigrationism [sic] at all costs, incapable of seeing that their sick logic is sacrificing people the world over on the altar of alienating turbo-capitalism”.

“For all of you, children of a country that you no longer love,” he told the volunteers, “we’re here to remind you that the real people loves and does not destroy itself. Stop the invasion.

“Now you can go back to discussing how to ruin our country,” he concluded.

A video filmed by one of the volunteers then shows the surreal spectacle of the men filing out of the room as the association members wish them goodnight and ask them to be quiet leaving the building.

The whole encounter only lasted a few minutes. Yet commentators say it’s another alarming sign of how visible neo-fascism is becoming in Italy, as economic crisis combines with the arrival of migrants – and the stirring of populist politicians – to fuel xenophobia.

“It is unacceptable that that a group clearly inspired by neo-fascism interrupts a peaceful meeting to deliver their racist ramblings,” commented Carla Nespolo, the president of Italy’s partisans’ association Anpi, which maintains a lookout for new forms of fascism in Italy.

The group called on the government to give an urgent response to what it described as “the umpteenth, shameful episode”.

Veneto Fronte Skinheads are a prime example of what Italy calls “naziskins” – a portmanteau of Nazi and skinhead. Founded in 1986, according to La Repubblica, in recent years the group has taken to targeting charities that offer assistance to migrants.

“They wanted to intimidate us, but they didn’t succeed,” a spokeswoman for Como Without Borders, Anna Maria Francescato, told local news site Qui Como. “We’ve received lots of messages of support that encourage what we’re doing. We certainly won’t change any of our activity and we’ll continue to fight fascism.”

Asked to comment, the leader of the Northern League – a nationalist, far-right party that has made immigration its leading talking point – said the skinheads were wrong to enter the meeting without permission.

“That's not the way to solve the problem of immigration, which so far has been tackled with the wrong policies,” Matteo Salvini told La Repubblica, adding that his supporters are planning nationwide demonstrations this weekend against a new law that would allow the children of non-Italian residents to seek citizenship.