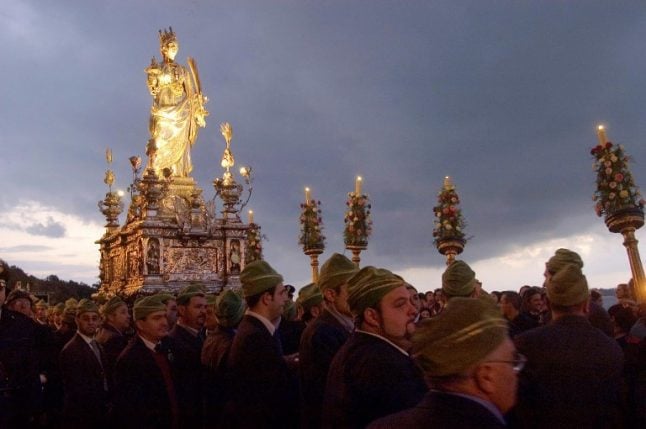 The historical Lucia came from what is today Italy: specifically, the city of Syracuse in Sicily.

Born to a wealthy family in the time of Roman rule, young Lucia had a vision of another Sicilian martyr, Saint Agatha, who helped her cure a chronic illness afflicting her mother. She promptly donated her worldly goods to the poor, which angered the man her family had promised she would marry. He denounced her as a Christian – a crime then punishable by death – and she was sentenced to be sent to a brothel and raped.

Yet when guards came to take her away, her body became so heavy they couldn’t move her. They then heaped kindling around her in order to burn her alive, but the wood wouldn’t light.

After further attempts to torture her, Lucia was beheaded.

Where is she worshipped?

Lucia has been venerated by Italian Catholics for centuries, as the patron saint not only of Syracuse but of communes all over Italy.

Churches from Naples to Milan keep relics from her remains, most of which are currently in San Geremia in Venice.

Her hometown of Syracuse has two major churches dedicated to her: the Basilica di Santa Lucia al Sepolcro, home to a miraculous statue of the saint that is once said to have sweated for three days, and Santa Lucia alla Badia, which boasts a Caravaggio painting of her burial. Burial of Saint Lucy by Caravaggio

As you’d expect, Lucia’s feast day is a big occasion in Sicily – but the north of Italy, especially Lombardy, has its own traditions of celebrating the saint that date back centuries.

What do Italians do on Saint Lucia’s Day?

In Italy as in Sweden, Lucia’s feast day – timed to coincide with the winter solstice according to an earlier calendar – is a symbol of light in the darkness (Lucia derives from lux, the Latin word for light).

The day is celebrated particularly in the more religious south of Italy, and especially in coastal areas.

It’s often marked with fireworks or bonfires – for instance in Naples, where the faithful traditionally light fires at dawn all along the seafront leading to the church of Santa Lucia a Mare.

Local fishermen are especially grateful to the saint for helping them to navigate the water in the dark of winter, and she is the subject of one of the city’s most famous traditional songs.

Many towns and cities will put on a special Christmas market on this date.

Sicilians celebrate with a parade in Syracuse, when a precious silver statue of the saint is carried through the town before being placed on display in the Basilica di Santa Lucia al Sepolcro. It’s returned to the cathedral in a second parade seven days later.

In Sicily it’s traditional to eat cuccìa, a sort of pudding made from boiled wheat kernels, in memory of the time Lucia supposedly saved the island from famine: in 1646, as Sicilians were starving, a boat filled with grain miraculously appeared in Palermo harbour on Saint Lucia’s Day. The grateful residents were so hungry they ate the wheat whole without bothering to grind it.

Even now, many Sicilians abstain from eating bread and pasta on December 13th in honour of their saviour saint. In the north of Italy, meanwhile, Santa Lucia celebrations are more indulgent. In parts of Veneto and Lombardy, especially Verona, Crema, Cremona and Bergamo, the saint has become a sort of Father Christmas figure, visiting in the night to bring children gifts.

Youngsters write letters and leave them out for her to find, while on the night before December 13th, they set out milk or coffee for Lucia, biscuits and wine for the helper who accompanies her, and flour or hay for the donkey she rides.

They must go bed and keep their eyes shut tight, however, or Lucia – the patron saint of sight – might throw stinging ash in their eyes. Obedient children wake up on Saint Lucia’s Day to find sweets and presents awaiting them. The tradition is said to stem from an occasion when Lucia saved Verona from an eye affliction that was plaguing the northern city’s children. Desperate parents walked barefoot to her shrine, convincing reluctant children to join them by promising them that the saint would bring treats.

Other parts of Italy honour Lucia’s association with eyes – one legend states that her torturers gouged out her eyes before she died, another that with light she brings sight – by making gli occhi di Santa Lucia, Saint Lucia’s eyes.

Despite their slightly off-putting name, these little round biscuits made with flour, oil and white wine are a traditional December 13th treat in Puglia.

People everywhere in Italy have a more mundane reason to pay attention to Saint Lucia’s Day: there’s an Italian proverb, “Da Santa Lucia, il freddo si mette in via” – from Saint Lucia’s Day, the cold is on its way. 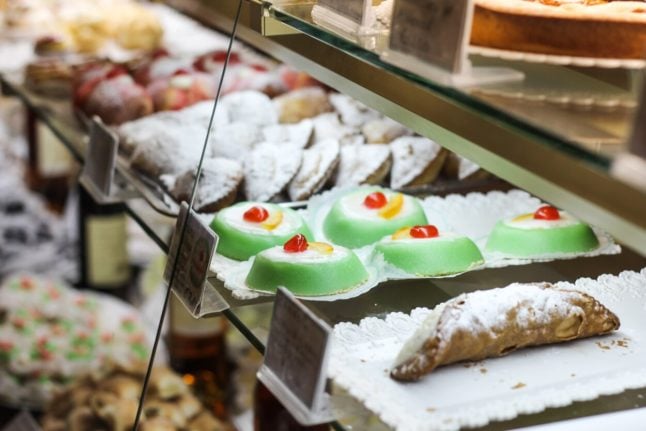 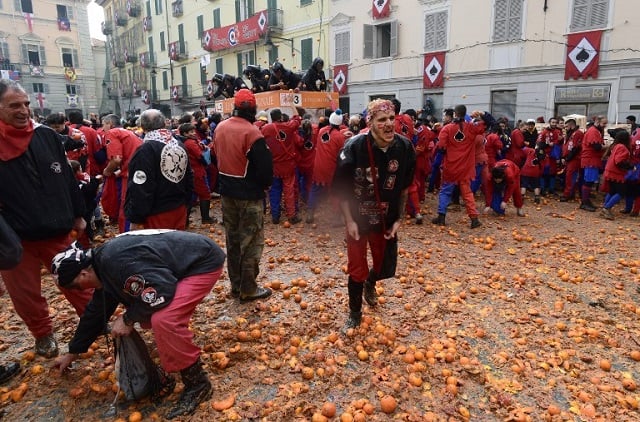 Italian desserts at Easter go so much further than a chocolate egg.Photo: Valentina Locatelli

In many countries Easter means chocolate. Bags of pastel-coloured mini eggs, tin-foil-wrapped chocolate bunnies and the classic hollow egg, ready to be smashed to pieces.

These cocoa-based confections are available in Italy – though not in the same aisle-filling quantity – but chocolate simply isn’t the go-to Easter treat it is in other parts of the world.

Not when these traditional, and often regional, dolci start to appear on the shelves of pasticcerie around the country.

Supposedly shaped like a dove – though, in reality, with a more blob-like form – colomba is an enriched sweet bread very similar to panettone. In the 1930s, the Christmastime treat was already being produced industrially but was, of course, only sold for a short period of the year. In order to boost sales, the Milanese baking company Motta came up with a new product which used the same equipment and almost the same dough as panettone.

Traditionally, colomba was made with candied fruit and topped with whole almonds and icing whereas panettone had both dried and candied fruit but no icing. These days the two desserts are almost interchangeable and both come in a variety of flavours, such as pear and chocolate, cherry, and pistachio.

Pardulas are star-shaped tartlets filled with saffron-spiked ricotta. Hailing from Sardinia, they’re customarily made with sheep’s milk ricotta – there are more sheep on the island than there are people – but versions sold elsewhere in Italy may use more readily available cow’s milk ricotta. Other variations include citrus flavourings and the addition of raisins to the filling. They’re now available all year round but pardulas are still the quintessential Easter treat for Sardinians and are often served drizzled with honey.

Yes it’s pizza, but not as you know it. Think light and fluffy cake rather than a flat margherita-style pie. Eaten in central Italy, pizza dolce di pasqua (‘sweet Easter pizza’) can be enhanced with cinnamon, candied fruit, raisins, or even aniseed.

Traditionally, home cooks would make the dough on Good Friday, giving it enough time to rise before baking on Saturday evening. Eaten at breakfast on Easter Sunday, it’s often served with a spread of salami, boiled eggs and hot chocolate. A savoury form of pizza di pasqua, made with Parmigiano or Pecorino cheese, can also make an appearance at the table. Torta di riso is made with similar ingredients to a British rice pudding, but is baked in the oven until the mixture is thick enough to cut a hefty slice. Both Tuscany and Emilia-Romagna boast interpretations of this comforting dessert and serve it up on special occasions such as birthdays or religious holidays, as well as Easter. Sicily is well known for its desserts – thanks, in part, to the invasion of the Arabs in the 9th and 10th centuries, who bought with them sugar cane and new sugar production techniques – but the Sicilian cassata is an especially elaborate cake, even for those with a sweet tooth. Soft sponge is layered with a sweetened ricotta filling before being covered with marzipan and icing. A rainbow of candied fruit on top provides a final excessive flourish to the cake, which was traditionally only served once a year due to its expensive ingredients and labour-intensive recipe.

‘Mpanatigghi are half-moon shaped biscuits filled with a mixture of chocolate, nuts, cloves, cinnamon and… beef.

No, they weren’t inspired by Rachel from Friends’ infamous ‘meat trifle’ but were most likely introduced to Modica in Sicily by the Spanish in the 16th century. The minced meat is almost undetectable in the finished product and legend has it that nuns in the local monasteries would make the biscuits during Lent to secretly ensure church leaders had enough energy during fasting.

Pink, doughnut-shaped and topped with white icing and multicoloured sprinkles, the ciaramicola looks more American than Italian at first glance. In fact, this cheerful cake comes from Perugia, where it was customary for brides-to-be to give one to their future husbands at Easter time. The colours come from a splash of red Alchermes liqueur in the batter and a white meringue topping, and are said to represent the Perugia coat of arms.

It’s thought to have links back to ancient times when it was eaten during Pagan celebrations of springtime, but the pastiera as we know it today was perfected by nuns from the Church of San Gregorio Armeno in Naples’ historic centre. Their recipe of a shortcrust pie with a filling of ricotta, cooked wheat, candied fruit and orange flower water is now an essential for pastry shops throughout Italy at any time of year.

Originally cooked up for Christmas and Easter, the gubana is now eaten at any special occasion in Friuli-Venezia Giulia. However, the northern region is keeping the recipe to themselves as this sweet bread is rarely found further afield. The characteristic spiral shape comes from rolling a brioche-like dough with a filling of walnuts, pine nuts, sugar and lemon zest. Sometimes grappa is also used to flavour this rich cake. 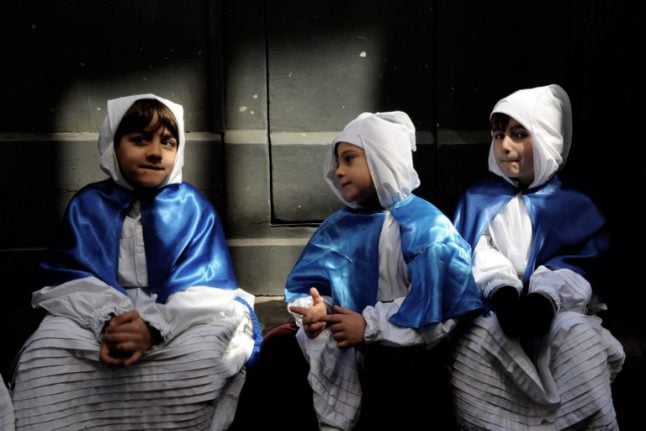 EASTER
The essential guide to an Italian Easter 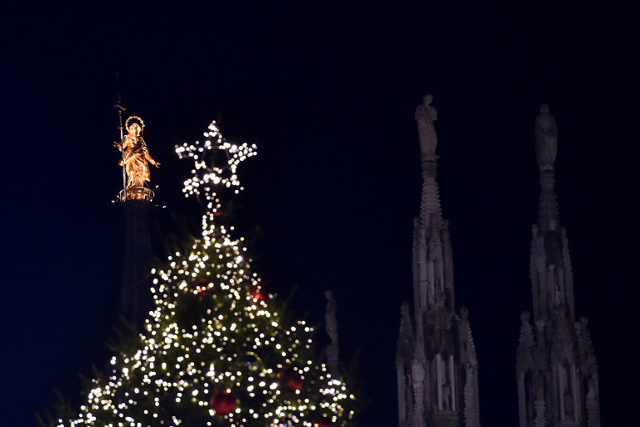 CHRISTMAS
How to celebrate Christmas like the Italians
Url copied to clipboard!