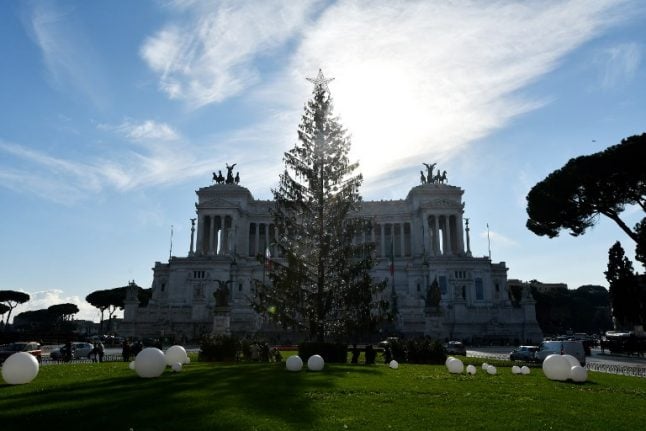 The Christmas tree erected in Piazza Venezia at a cost of nearly €50,000 is deceased, no more, bereft of life, a spokesperson for the capital's environment department confirmed to Corriere della Sera on Monday, a full week before Christmas.

In fact the spruce – better known by its nickname “Spelacchio”, which roughly translate as threadbare, shabby or balding – was dead from the start, the spokesperson said: it left its roots in the Dolomites, literally, and was brought to Rome a mere trunk.

That doesn't necessarily explain its sickly appearance, the part of northern Italy that supplied the tree insisted. “Despite being technically dead, trees can remain luxuriant for a month and a half, two months,” a spokesperson for the Val di Fiemme area in Trentino told La Reppublica. Luxuriant Spelacchio was not. The tree was missing most of its needles, prompting some wags to compare it to a toilet brush.

“It left our valley in optimum condition,” the spokesperson told Repubblica, producing photos of a much happier-looking Spelacchio being lashed to the back of a truck. “What happened is that it wasn't unloaded correctly once it arrived in Rome, which is an extremely delicate operation because there's a risk of breaking the branches.”

Mayor of Rome Virginia Raggi, who authorized the payment of some €48,000 for the tree, has reportedly launched an inquiry into its untimely demise.

Whatever the reason, Spelacchio was one sorry-looking spruce, as internet users were quick to point out.

“Discover Spelacchio's new advantage! If you're on the other side of the square and you want to zoom in on the National Monument to Vittorio Emanuele II, this year you can: there are a few arthritic branches but zero leaves to block the view.”

And a few brands even got in on the act, with a Naples hair specialist writing in a promoted post on Instagram: “Don't be like Spelacchio… if you have problems with hair thinning or baldness, call us for a free consultation”. Another beauty company advertised own hair removal services as a “Spelacchio lifestyle”.

Spelacchio is the successor of a tree dubbed the “Austerity Tree” and labelled the ugliest in the world during last year's festive season.

Locals complained so much about the threadbare fir that Mayor Raggi eventually announced a sparkly makeover, though she explained that both the tree and its lights had been donated to the city, allowing the council to save on decorations in order to put the money towards projects to help local residents.

Romans in search of some festive cheer this year need not despair: the Vatican has a magnificent red fir in St. Peter's Square that somehow managed to make it all the way from Poland without dropping its needles. CHRISTMAS
Seven of Italy’s most enchanting Christmas markets in 2022
Url copied to clipboard!