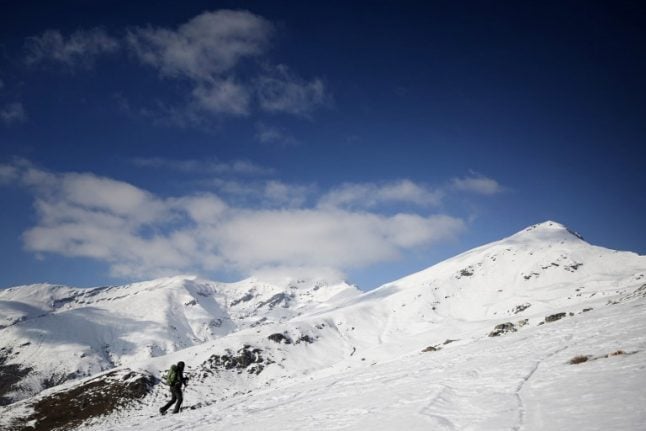 An alpinist in mountains of Piedmont. Photo: Marco Bertorello/AFP

The risk in the region’s north-western mountains is “very strong” in parts and “strong” in others, Italy’s environmental protection agency, Arpa, said on Monday.

The danger will be highest overnight and into Tuesday morning.

While snowfall is easing, the fresh snow is so dense and wet that it has made the mass of snow covering the slopes extremely unstable, Arpa said.

The risk should gradually begin to lessen in the coming days as humidity reduces, the agency said, though venturing off piste will remain extremely dangerous. Arpa's map of Piedmont showing the avalanche warning at five (maximum) and four.

Two off-piste skiers, an 11-year-old German girl and her mother, were killed last week in an avalanche in Val Venosta, in the northern Alto Adige region.

On Monday roads to the ski resorts of Cervinia and Cogne, both in Valle d’Aosta to the north-west of Piedmont, were closed – in the first case by precaution, in the second because an avalanche blocked the route. It is the second time in a week that Cervinia has been cut off, stranding thousands of visitors during a busy ski season.

Meanwhile the nearby village of Champoluc evacuated residents and tourists for fear of sliding snow and was preparing to close roads.

Heavy snow and rain has disrupted traffic across northern Italy and is forecast to continue into Tuesday. Other parts of Italy, however, are experiencing exceptionally warm weather, with temperatures of more than 20 degrees Celsius recorded last weekend in parts of the south and centre.