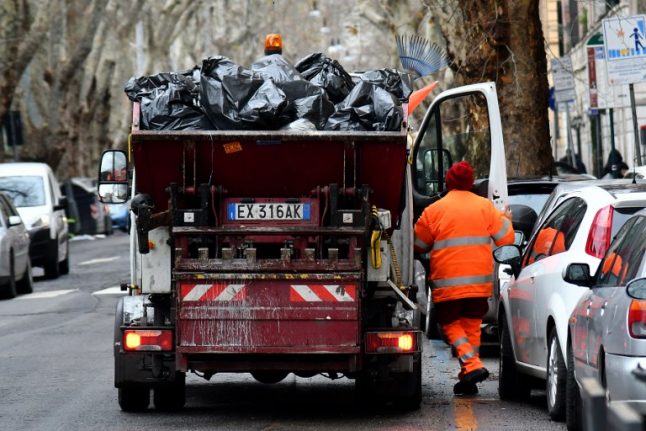 Rubbish has been piling up on Rome’s streets since Christmas, when Romans had more to throw away than usual and collections were interrupted for the holidays. Some parts of the capital have yet to clear away the overflow, which has become a pungent embarrassment for the city’s administration.

The government of Abruzzo, the region to the east of Rome, on Thursday agreed to process a maximum of 39,000 tonnes of the capital’s refuse at three waste treatment facilities over 90 days.

It comes a day after Italy's environment minister warned that the European Union could intervene if Rome failed to come up with a plan.

The Five Star Movement (M5S), which governs Rome via Mayor Virginia Raggi, has accused its political opponents of seeking to exploit the crisis ahead of Italy’s general election in March.

M5S leaders complained about the price charged by the regions of Abruzzo and Emilia Romagna, both governed by the Democratic Party (PD), to treat Rome’s waste, while Mayor Raggi claimed that the PD governor of Lazio – the region to which Rome belongs – had delayed approving a request to start sending the capital’s waste to other regions before the Christmas overload.

Rome’s rubbish problems predate the current government. The capital has struggled to deal with its waste for decades, with questionable contractors hired again and again. Rome’s vast Malagrotta landfill was found to fall short of European standards and ordered closed in 2013.

Since then the city has resorted to sending garbage to different parts of Italy or even other European countries. Pictures of its notoriously overflowing bins regularly feature on social media and the popular blog Roma fa schifo (“Rome is gross”).

Raggi made the issue a central feature of her campaign and promised to dramatically reduce waste and increase recycling when she took office in 2016. Yet the separate bins, extra rubbish trucks and new treatment plants required to reach this goal have been slow to appear.

The capital still recycles only a fraction of its rubbish: less than half of all waste collected in 2016 was sorted and recycled, according to one recent study cited by La Repubblica. Of the organic waste separated out, under 6 percent was composted.