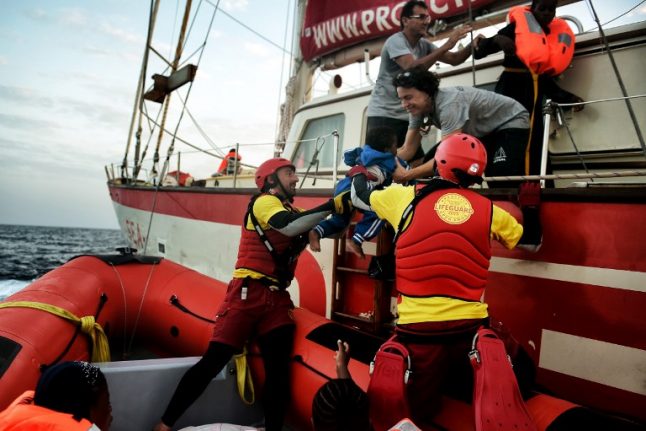 Over 1,600 migrants have been rescued in the Mediterranean since Tuesday, including many women and children. While some were brought to land on Thursday, hundreds of others could be trapped for days yet by stormy seas.

The Proactiva Open Arms and Sea Watch 3, which have plucked over 700 people from unseaworthy vessels between them, are too small to attempt the rough crossing back towards Italy with that number of people aboard.

They are currently being forced to take shelter off the coast of Tunisia until the weather calms.

1671 #migrants rescued in the waters between Libya and Italy in two days: 1457 on Tuesday and 214 on Wednesday. Three victims. (photo: @oimitalia staff this morning in Catania, where the ship Aquarius brought 505 migrants saved at sea) pic.twitter.com/OdAjMZRwqI

“This is one of the most difficult situations we have had to face so far,” Laura Lanuza, spokesperson for the Spanish organization Proactiva, told AFP.

On Tuesday, Proactiva's medical team sounded the alarm over an 18-year-old woman who had been rescued but whose life was in danger after a difficult delivery. She and her four-day-old baby were evacuated by helicopter in the evening.

Proactiva asked for another medical evacuation on Wednesday, for the baby and a woman who was about to give birth prematurely.

The Italian coast guard told AFP it had received the request on Wednesday evening, at which point the baby was described as stable. A boat was dispatched from Lampedusa for the evacuation, but because of the bad weather it did not arrive before dawn on Thursday.

The baby in the meantime had deteriorated, and died.

“Haid Aman was three months old. He died overnight. Desolation, rage, helplessness… words fail to express the devastating pain of a mother” faced with such tragedy, Proactiva said on Twitter.

The three-month old joins the bodies of another baby and a young man found dead by the Proactiva on Tuesday on an overloaded wooden boat.

The rescue ship does not have a cold room for storing the dead, so all three are being towed behind in body bags in a rigid dinghy usually used to ferry migrants to safety.

“Rescue vessels have reached the limits of their capacity, cargo ships are being diverted to the south to assist,” said Klaus Merkle, rescue coordinator on the Aquarius, which is chartered by SOS Mediterranee and Doctors Without Borders (MSF).

“This extremely dangerous situation is likely to continue in the coming days,” he told AFP, adding that the Aquarius would immediately return to the rescue zone after disembarking 505 rescued migrants in Sicily on Thursday.