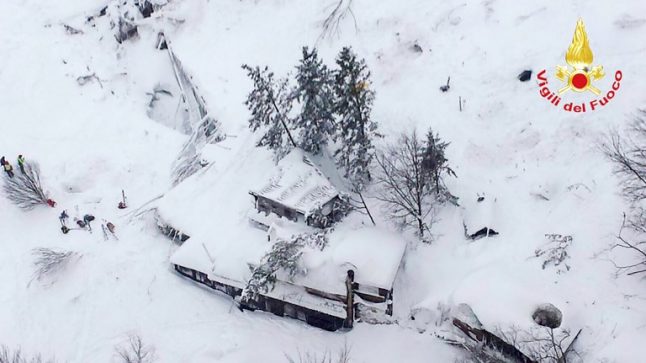 An aerial view of Hotel Rigopiano the day after the disaster. Photo: Vigili del Fuoco/AFP

The disaster was the deadliest avalanche in Italy in almost 100 years.

On Thursday victims' relatives, local residents and representatives of the authorities and emergency services said prayers, read poems and laid flowers outside the remains of the hotel as part of a commemoration day.

“Never again”, read a display showing the portraits of those killed – some working at the Hotel Rigopiano and some simply holidaying there.

Here's how the disaster unfolded, and what's happened in the year since then.

A combination of heavy snowfall and seismic activity in the Abruzzo region is thought to have caused the avalanche. The snow slide weighed 120,000 tonnes and hit the Hotel Rigopiano with a speed of around 100km/h – a force equivalent to 4,000 trucks. The four-storey hotel was ripped from its foundations and collapsed almost entirely, with only the cellars and spa left intact. Many of the victims had been gathered in the hotel lobby awaiting evacuation at the time of the disaster.

How did the rescue take place?

Alpine rescue crews were mobilized in nearby Farindola almost two hours after the first call to emergency services, with several reports accusing authorities of not taking initial reports seriously enough.

The eight-kilometre road to the resort was blocked by about two meters of snow, and was not cleared until a day later. Rescuers instead reached the site on skis, on foot and by helicopter, and used spades to dig through the snow. Hundreds of people from the emergency services, Civil Protection and alpine rescue worked round the clock until all survivors and bodies had been recovered. Volunteers, including a group of asylum seekers, joined the gruelling rescue effort.

Rescue teams later won an award for their use of technology and drones in the search, which helped save time by identifying spots where people might be trapped, by tracking body heat, phone signals and other data. A total of 29 people died in the avalanche, with autopsies revealing that all but two of them died of impact rather than hypothermia. Coroners said that at least one of the victims, 29-year-old hotel waiter Gabriele D'Angelo, could have survived had he been reached by rescuers within two hours.

The final bodies were not recovered until a week after the snowslide, and the Italian fire service's head of emergency and rescue said it was “one of the most complex operations we have ever managed.”

A further six people died in connection with the extreme weather in the area in January 2017 when an emergency services helicopter crashed. That number included two of the rescuers who had helped in the Rigopiano search effort.

Who were the survivors?

After two days of rescue efforts in exceptionally harsh conditions, rescuers made contact with a group of six survivors in an air pocket and a mother and her young son were the first to be pulled to safety. One of the officers who reached the group said the survivors “looked like they had been reborn”. In total nine people, including four children, were pulled out alive. Parete's wife, Adriana, and their two children, Gianfilippo, 7, and Ludovica, 6, were among those saved. The family has since written a book about their experience, saying they spent much of the past year struggling to believe they were still alive.

Two other children, Edoardo, 9, and Samuel, 7, were rescued, though each lost both their parents in the tragedy.

Georgia Galassi, 22, and her boyfriend Vincenzo Forti, 25, survived. Galassi said her first words to the rescuers – “I'm Georgia, and I'm alive” – was the “most beautiful thing I've ever said”. Five days after the avalanche, three puppies were found alive under the rubble. The dogs had been born just a few weeks earlier to the hotel's resident dogs, Lupo (Wolf) and Nuvola (Cloud), who had escaped the quake and found shelter in the nearby village of Farindola.

They became a symbol of hope and comfort amid a tragedy felt all over Italy.

What's happened since then?

A investigation was opened within 24 hours of the tragedy and is still ongoing a year later. Prosecutors have cited 23 people, including regional and local authorities, mayors, a police chief and others responsible for disaster prevention and management, for possible negligence leading to injury and death.

There are four main lines of inquiry: whether local authorities should have acted sooner as dangerous weather conditions made an accident more and more likely; whether they failed to take measures that could have sped up the rescue effort, such as sending in snow ploughs and closing roads to traffic; whether they should have given planning permission to the hotel in the first place, since it was in an avalanche danger zone; and whether regional authorities should have ordered evacuations and other avalanche precautions days earlier.

Investigators are expected to present their conclusions a few weeks after the anniversary.

A committee of the victims' relatives, who organized the commemorations, said they would use the anniversary to “silently shout to the world our anger and our thirst for truth and justice, which we will never abandon”.

President Sergio Mattarella, who along with Prime Minister Paolo Gentiloni is due to meet victims' families and survivors in Rome on Monday, called the disaster “a deep wound for the community involved and for the entire country”.

No one could forget the images of the aftermath or the long wait for survivors and bodies to be found, he said, nor the bravery of the rescue workers – which he called a testimony to “the genuine collective solidarity that the Italian people manages to offer in the most dramatic ordeals”.

READ ALSO: These were Italy's major news stories in 2017