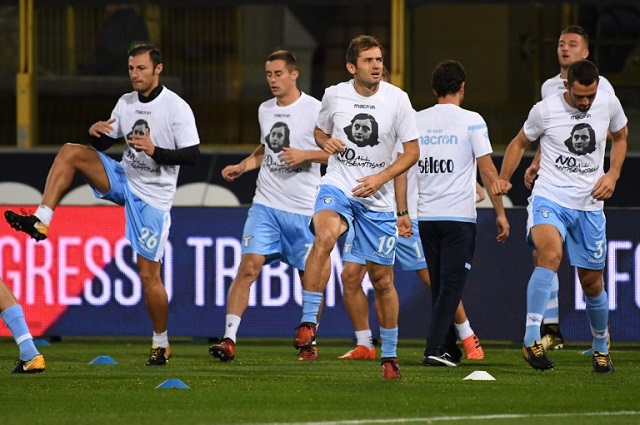 FIGC prosecutor Giuseppe Pecoraro had demanded a fine and two games be played behind closed doors after Lazio's infamous ultra fans fly-posted photos of Anne Frank in a shirt of bitter city rivals Roma during a game against Cagliari last October.

The FICG said in a statement Thursday that their sporting tribunal had decided on a “partial acceptance” of the prosecutor's requests.

The two Rome clubs share the Stadio Olimpico and Lazio's ultras were housed in the south end of the ground normally reserved for Roma supporters. Their own north end had been closed following racist chants during a game against Sassuolo earlier the same month.

The FIGC noted in its report that the stickers featuring the photograph were placed in the south end with “clear anti-Semitic intent, constituting discriminatory behaviour”.

But it accepted Lazio's argument that very few people were involved, the stickers were very small and could not have been detected by club observers, and were only found the day after the game.

“The stickers taken inside the stadium were so small that, even using the utmost diligence, they would have escaped the safety checks which, as correctly observed, don't include body searches of fans,” the report said.

Lazio said 13 people were involved, all of whom had been subjected to banning orders.

The FIGC found that the club had “put in place all appropriate measures as required by current regulations, to ensure effective control measures”. And given the small number of fans involved, it was found that their actions “could not have been prevented”.

The FIGC also opted not to close the stadium, explaining that “in this way almost all of Lazio's fans would be penalized for the behaviour of a few people”.

Thirteen Lazio fans have received stadium bans of between five and eight years in connection with the pictures which provoked an outcry in Italy.

After the incident, Lazio players donned shirts bearing a picture of Anne Frank for a match, and extracts were read from the Holocaust victim's diary.

The team have also announced plans to take their supporters to Auschwitz.

Lazio are flying high in Serie A and opened up a three-point lead over fourth-placed Inter Milan with a 3-0 win over Udinese on Wednesday to boost their push for a Champions League spot next season.