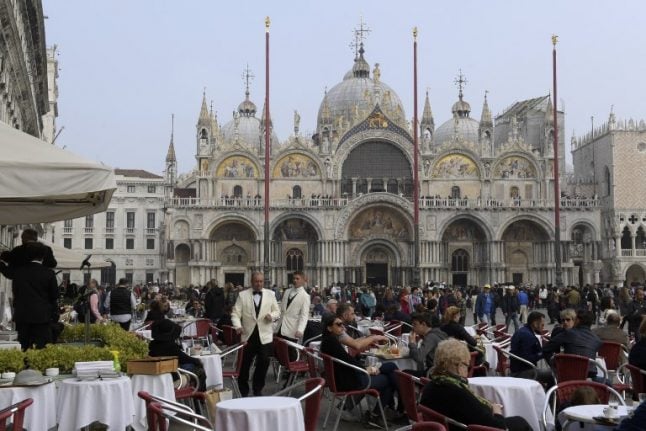 Venice's tourist hotspots have been accused of ripping off visitors. Photo: Miguel Medina/AFP

The incident, which made headlines across Italy and abroad, earned the Osteria da Luca a visit from police, health officers and building inspectors, as well as an investigation by the Guardia di Finanza, Italy’s financial crime police.

The inspections have resulted in fines totalling round €14,000 so far, according to Il Gazzettino. Authorities found a number of structural and food safety irregularities, local media reports said.

The Guardia di Finanza are continuing to investigate whether the restaurant may have failed to issue other customers a receipt, as it did in the case of the four tourists.

The customers, Japanese students living in Bologna, were only able to prove the price of their lunch thanks to a credit card receipt, which showed they had paid the restaurant an eye-watering €1,143. They had ordered four steaks, a platter of fried seafood and a few drinks.

They later made a police complaint, prompting support from a Venice residents’ group, the Gruppo 25 Aprile, and a promise from Mayor Luigi Brugnaro of a full investigation.

The four students have since been invited back to Venice by the Venetian Hoteliers Association, which offered them two nights in one of the lagoon city’s luxury hotels – free of charge, naturally – in an effort to counteract the “grave damage that the episode is doing to the city’s image”.

Not every tourist overcharged in Venice is so lucky.

In November 2017, a British family complained about a €500 bill for lunch near St Mark's Square, saying waiters had taken advantage of their lack of Italian skills to bring them expensive dishes they hadn’t ordered. That came shortly after a Japanese couple was charged €120 for a plate of lobster at a central Venice trattoria, though they were able to get the bill reduced by 40 percent with the help of another customer.

At the time, Mayor Brugnaro branded the British visitors “cheapskates”.

On the same day as the latest incident, three of the students’ friends ate at another restaurant, the Trattoria Casanova, where they ended up being charged more than €300 for two first courses, one main and two bottles of water. Again, they weren’t given a receipt.

Authorities also inspected that restaurant this week, according to La Nuova Venezia, though officers didn’t find any infractions.

Price disputes are especially common around the time of the annual Venice carnival – which starts this weekend – when the city is even more packed with tourists than usual. The Guardia di Finanza usually step up their restaurant inspections in the historic centre to check whether eateries are issuing receipts, La Nuova Venezia said, resulting in fines and even temporary closures.

Stay tuned for The Local's guide to authentic spots to eat and drink on a budget in Venice.