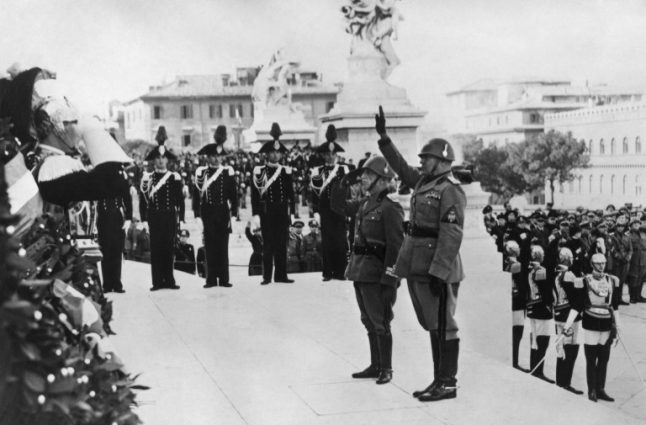 The setting may be a theatre, but the prosecutor, witnesses and three judges meeting in Rome are real, their scrutiny of the controversial monarch part of events organised to mark Holocaust Remembrance Day.

The Trial comes a few weeks after the remains of Vittorio Emanuele III were discreetly returned to Italy. The king, who  ruled from 1900 to 1946, fled in disgrace and died in exile in Egypt in 1948.

Three high-ranking judges sit at a table under the motto hanging in courts across Italy: “The law is equal for all”. The charge? Betraying the spirit of the monarchy's statute, which tasks it with guaranteeing all its subjects are equal.

Witnesses describe the horror of laws the fascist regime introduced from 1938 to ban Jews from public life.

At the time, there were 46,000 living in Italy. Thousands of pupils and hundreds of teachers were kicked out of schools, 400 civil servants and 24 generals were fired.

The noose tightened further until deportations began under German occupation in 1943, resulting in the slaughter of some 8,000 Italian Jews.

One woman reads out a letter from her grandfather describing not only the humiliation he suffered, but also the kindness of those in the monasteries that hid him and his relatives.

Experts go through the list of renowned academics in exile, including three future Nobel Prize for medicine winners.

By signing the racial laws, Vittorio Emanuele III made an “immoral, illegal and anti-historical use” of his powers, says Rome military prosecutor Marco De Paolis.

The king “failed in his duty of opposition. He could have set an example, shaken awake the Italian people's conscience,” he says.

But the defence witnesses describe a Benito Mussolini at his peak after 16 years in power – not a man easily challenged. Il Duce had in fact just dismissed the royal as head of the armed forces and was waiting for a pretext to get rid of the short man Italians called their “little king”. A man carries a portrait of Vittorio Emanuele III and his wife, Queen Elena, outside the building in northern Italy where the king is buried. Photo: Marco Bertorello/AFP

“I was faced with an unfair and terrible choice,” says Umberto Ambrosoli, playing the king, as he describes his anguish over whether to sign the racial laws or not.

“I made the choice that seemed the least bad for the country,” he says, despite admitting his “disgust” at his own decision to allow the persecution of Jews, a community faithful to the monarchy. “Mussolini had all the power and with the annexation of Austria, the Germans were at Brenner”, on the border, he says, arguing that by staying on the dictator's side he staved off Italy's descent into civil war.

“In condemning the king, we risk forgetting Mussolini's responsibility,” is his final plea.

The court retires to deliberate. The verdict is in – but the judges rule that although the king did violate the spirit of the statute, that same document describes the “sacred and inviolable” character of the royal, who cannot be judged.

The trial is declared invalid, but it matters little. Vittorio Emanuele was already judged and found wanting by his subjects on June 2nd 1946, when Italians voted in a referendum to get rid of the monarchy and become a republic.

The “little king” had abdicated a month earlier in the hope that handing the reins to his fresh-faced son Umberto II would be enough to save the regal house – but in vain. Both were sent packing.