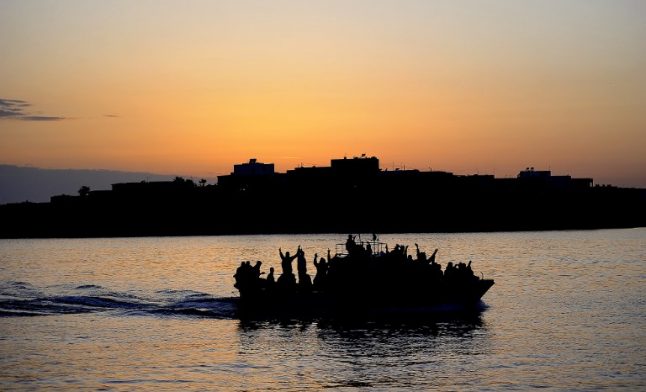 Migrants from Tunisia near the Italian island of Lampedusa. Photo: Filippo Monteforte/AFP

“There is no confirmation of the report that 50 'foreign fighters' belonging to Isis landed on the Italian coast and are prepared to carry out attacks,” according to the Department of Public Security, which commands the police in Italy.

Italy works closely with Tunisia on the issue, the department said in a statement, and their efforts had identified a “small number of people” flagged by the Tunisian authorities who made it onto Italian soil. Those people were “immediately” deported, it said.

The statement came hours after British newspaper The Guardian reported that Interpol had drawn up a list of 50 suspected Isis militants who the international police organization believed landed in Italy by boat in the last half of 2017.

According to the paper, which said that it had seen the list, all of those named are Tunisian nationals. They are believed to have landed in Sicily between July and October 2017, The Guardian said, and some were identified upon arrival by the Italian authorities.

According to its report, Interpol sent the list on November 29th to Italy's Interior Ministry, which then shared it with anti-terrorism agencies across Europe. Interpol warned that the Tunisians could attempt to cross into other European countries from Italy; at least one may have already reached France, The Guardian quoted the agency as saying.

In its statement, the Department of Public Security said that it carried out twice-weekly deportations of people arriving in Italy from Tunisia illegally. Most are not suspected of extremism but do not have permission to stay in Italy.

Italy and Tunisia stepped up their collaboration on illegal migration and terrorism after a Tunisian who arrived in Italy by boat, was denied asylum, imprisoned then ordered to leave the country, went on to kill 12 people in an attack on a Christmas market in Berlin, Germany.