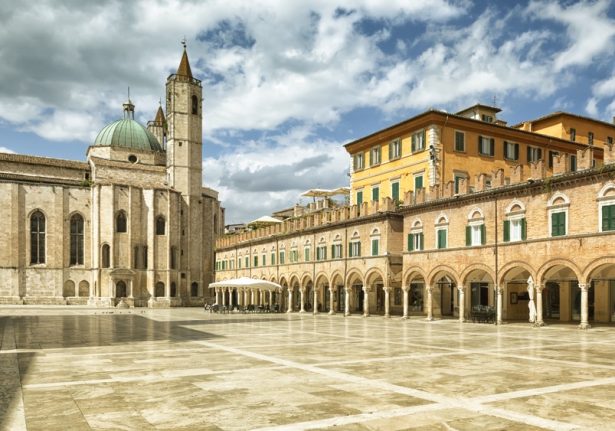 So you’re sitting at your desk and you can’t decide whether to continue your mind-numbingly boring project or kill your boss? Your last three internet dates looked straight from the cast of Night of the Living Dead? It has snowed so much you’re questioning your commitment to global warming?

What photo do you put on your computer to keep you motivated? The Grand Canal in Venice? The Ponte Vecchio in Florence? Piazza Navona in Rome? How about just a damn pizza from Naples?

I have a better idea. In fact, I have ten of them. If you daydream about Italy, go where few others go. Here is a list of ten highly recommended off-the-beaten-path places I’ve been, mostly last year, during my combined five and a half years living in Italy.

Print this list, written in alphabetical order, and post it on your laptop instead of that gondola photo. It’s one of 14 towns in Castelli Romani, a series of villages in the picturesque Alban Hills south-east of Rome. At one time, they were used as defenses against an NFL lineup of foreign invaders and now offer some of the best views in Italy.

Ariccia is where Romans go to get away from the summer heat. It’s notably cooler in the hills and the town’s centre is lined with restaurants specializing in porchetta. That’s the rich, sizzling, suckling pig you see served all over Italy. Seemingly every shop window in Ariccia has a giant pig, its eyes thankfully closed, laying prone with a meaty butcher carving huge slabs off it.

Leading you into town is a long bridge with a beautiful view of the deep valley 60 meters below. It also has an eerie reputation: so many people committed suicide, the town built steel netting on both sides.

In 2002, I threw a felt pen at a giant map of Italy on my wall and visited wherever the pen landed. It hit Ascoli Piceno and I couldn’t have had better aim. It’s a charming small town of about 50,000 on the Le Marche-Abruzzo border, only 15 miles from the Adriatic coast.

Le Marche is Tuscany light. It has everything Tuscany has — beaches, vineyards, hill towns — at about half the price and a quarter the tourists.

Ascoli Piceno is so cute you’ll want to wrap it up in a doggy bag along with it signature dish, the olive all’ascolana: olives stuffed with meat then fried. It’s served from Sicily to the Alps but nowhere is it better than its birthplace. You also must try the fiori di zucchini con mozzarella e acciughe (zucchini flowers with mozzarella and sardines), cremini (fried cream puffs) and agnello fritto (fried lamb). Come during its annual Fritto Misto (Mixed Fried) festival, April 21st-May 1st.

Walk it all off by prowling the 9th-century Piazza del Popolo, which may be the prettiest piazza in Italy. I liked this little island off the west coast of Sicily so much I went there twice last year with my girlfriend, Marina. The Weather Channel made Favignana famous in 2016 by ranking it 13th on its list of bluest water in the world. Go in the fall when the Italian tourists have left and the water is still warm.

The butterfly-shaped island, formerly a major tuna fishing outpost, is only 14 square miles and the main mode of public transportation is bicycle. Rent one and cruise along the lonely roads, trying different beaches at every stop. Don’t miss Cala Azzurra (Blue Bay), which earned Favignana the spot on The Weather Channel’s list. Lake Como is my favourite lake in the world and Lenno may be my favourite town. Quiet and unpretentious, it’s lined with casual lakeside eateries for afternoon aperitivos. The lake is surprisingly warm in the summer and there’s even a small sandy beach for sunbathing.

You can also climb to the top of 1,700-metre Monte Tremezzo for great views of the cobalt-blue Lake Como.

Don’t join the throngs ogling George Clooney’s mansion in nearby Laglio. You can see it well enough when the ferry passes it on its way to Lenno. Instead, take a tour of Balbianello, built in the 18th century, one of the many astounding villas in the area. It’s hard to classify a place that gets hundreds of thousands of tourists a year “off the beaten path” but Matera is so far out of the way — yet so worth it — only the hearty make it here. It’s the world’s third-oldest continually lived-in city, a dead ringer for Old Jerusalem. That’s why 25 movies have been filmed there, including The Passion of the Christ in 2003.

It’s a seven-hour bus ride from Rome to Matera in Basilicata, Italy’s forgotten region between Puglia (the heel of Italy’s boot) and Calabria (the toe). Basilicata has only 570,000 people, making it one of the most rural in Italy.

Walk the narrow, windy streets between the stone houses of a city that has been continually inhabited for 9,000 years. Look inside the sassi (cave dwellings) where people lived until the neighbourhood was abandoned after World War II. It stayed that way until the 1980s when a reclamation project brought it back to life.

You can also take a two-hour hike across the gorge for fantastic views back to the town. Instead of hustling from Rome to Florence, stop halfway in Orvieto. It’s a nice hilltown in oft-overlooked Umbria where the wineries are much less crowded and cheaper than neighbouring Tuscany.

Orvieto is perched atop a volcanic rock above vineyards and olive groves. Its duomo, a giant confection of white marble with an outrageous facade, is one of the prettiest in Italy. It should be. It took 300 years to build.

Take a tour of Orvieto Underground, a series of 440 caves used as bomb shelters during World War II, among other things.

Better yet, just wander the narrow streets and listen to the soft jazz wafting from various restaurants. Orvieto’s annual jazz festival, December 28th-January 1st this year, makes a stop worthwhile during the holidays. This former fishing village has become an offbeat beach destination in Puglia for those tired of the more popular Bari and Lecce.

Some of Italy’s best beaches are only three miles from the city centre, all accessible by public bus starting in June. In the off season, you can rent a bike for an easy, flat ride along the beautiful coastline. May is ideal as the Adriatic is already warm enough to swim and Italian tourists are a long way from arriving.

The charming port is a great place to stroll at sunset or have a glass of Puglia’s trademark Negroamaro wine in one of the many restaurants with views of the sea.

For insight into Otranto’s bloody history, check out the 11th-century cathedral where on display in glass cases are the skulls of 800 locals, courtesy of a Turkish invasion more than 500 years ago.

Like art? If you like art, you must study Caravaggio. If you study Caravaggio, you must visit Porto Ercole. This is the idyllic, seaside village in Tuscany where the great Baroque master died. His death remains a mystery (madness? Malaria? Murder?) but his intriguing life comes together in this lovely town sticking out on the end of a jetty.

A 90-minute drive from Rome, Porto Ercole has a Piazza Caravaggio, a Via Caravaggio and La Locanda Del Caravaggio. “The master of shade” is everywhere. His presence in the forest near the beach is marked by a small white statue, his face contorted in a silent scream.

The town wraps around a lovely harbour lined with nice restaurants, bars, craft stores and high-end apartments. The Spanish, who ruled in these parts 500 years ago, built forts on facing hills. Forget Capri. Next time, avoid the crowds and come to Procida, ten miles to the north. It’s what an Italian fishing village was like in the 1950s. That’s where Il Postino was set when the charming love story was filmed in 1994.

Procida is an island only 1.6 square miles with just 12,000 people. Its curved harbour with pastel-colored buildings is a perfect place to eat a Neapolitan pizza or have a glass of wine.

Take a cheap bus to the fine beach on the north end where you can also while away an afternoon at one of the many harbour bars. This walled hill town is 40 miles north of Rome and can be done in a day trip. However, after spending all day in the Terme dei Papi thermal baths, you don’t want to sit on a bus.

The outdoor baths, with different temperature pools, have been around since Michelangelo and Dante used them and are still popular with Romans today.

Wander the Old Town behind the Roman walls. The window shopping is wonderful but stop in Ejelo, a local wine and cheese shop where the owner will ply you with local Nettaro di Confini wine and wild boar sausage.

John Henderson is a writer and expat living in Rome. This is an edited version of an article that was originally published on his blog, Dog-Eared Passport. Find more of his travel stories here.