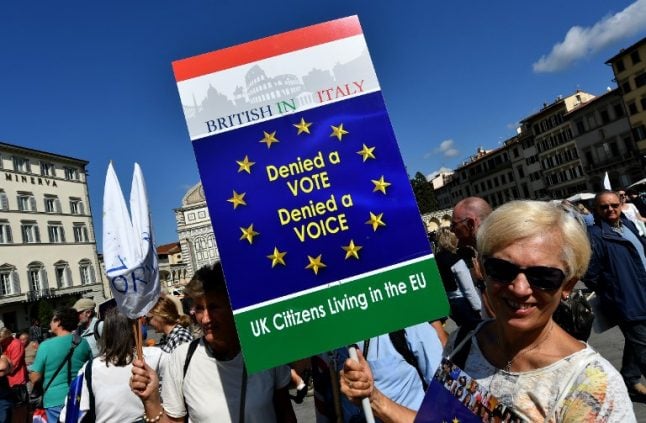 A protest against Brexit in Florence, September 2017. Photo: Alberto Pizzoli/AFP

The government statement said that UK citizens would now be able to vote in domestic elections regardless of how long they had been abroad, a rule change which will give millions of people living overseas the right to register to vote.

The 15-year time limit proved to be a constant source of frustration among British expats, particularly during the referendum on EU membership, when long-term expats felt like they were robbed of a voice.

“Participation in our democracy is a fundamental part of being British, no matter how far you have travelled from the UK,” Minister for the Constitution Chloe Smith. “It is right that we should remove the 15-year time limit on voting rights of British citizens living overseas and allow those who previously lived in the UK the chance to participate in our democracy.”

“Expats retain strong links with the United Kingdom: they may have family here, and indeed they may plan to return here in the future. Modern technology and cheaper air travel has transformed the ability of expats to keep in touch with their home country,” she said.

Italy is expected to increase checks and strictly enforce its quarantine rules amid concerns that thousands of people could arrive in Rome from the UK for the match despite the country’s travel restrictions.

All arrivals in Italy from the UK have to quarantine for five days and take two coronavirus tests under current health measures – but there are reportedly concerns that some fans will be unaware of the rules.

“I am clear and unequivocal – the English fans will not be able to come to Italy to watch the match at the Olimpico against Ukraine on July 3rd,” Andrea Costa, a junior Italian health minister, told Radio Kiss Kiss Napoli on Wednesday.

“There are five days of quarantine, the rule must be respected. We cannot take risks. If an English fan leaves today, he won’t see the game. Same for those who left yesterday.”

The Italian Embassy in London also said in posts on its social media channels on Wednesday that “Fans travelling to Euro 2020 matches are not exempted” from Italy’s quarantine rules.

Meanwhile, UK Trade Minister Anne Marie Trevelyan said: “our request is to support the national team from your home, to cheer in front of the TV as loud as you can”.

Ansa cited government sources who said the quarantine rules “will be enforced to the letter” and “no exceptions will be granted”. Photo: JUSTIN TALLIS/POOL/AFP
England fans living in Italy on Wednesday were scrambling to buy tickets for the match after the FA stated that it aimed to “facilitate as many ticket sales to English residents in Italy as possible” while fans in the UK were unable to travel.

Dozens of readers contacted The Local on Wednesday asking where they could get tickets, after UK media reports stated that the British Embassy would be distributing them.

The FA had stated that it was “working with Uefa and the British embassy in Italy” to facilitate sales.

However, the British Embassy in Rome confirmed to The Local on Wednesday morning that it “is not selling or distributing tickets for the match on Saturday in Rome”.

READ ALSO: Bars, house parties and fan zones: Where and how can you watch Euro 2020 matches in Italy?

The British Embassy said in a statement to The Local: “Under the UK Government’s traffic light system Italy is currently listed as an amber country.

“The UK Government’s travel advice clearly states that fans should not travel to red and amber countries to protect public health in the UK from new Covid variants.

“The Italian authorities are responsible for setting and enforcing the rules for entry into Italy. Its current guidance states that from June 21st, people travelling from the UK or those who have been in the UK in the previous 14 days must self-isolate for 5 days upon arrival in Italy, after which they must take a rapid antigenic or molecular swab test for Covid-19 and test negative for release.

“This means that fans travelling from the UK to Italy after June 28th will not arrive in time to be able to watch the Euro 2020 quarter-final in Rome on July 3rd 2021.”

Britain is experiencing a surge in new coronavirus cases, blamed on the Delta variant that was first detected in India.

FOOTBALL
UPDATE: How can England fans in Italy get tickets for the Euro quarter final in Rome?