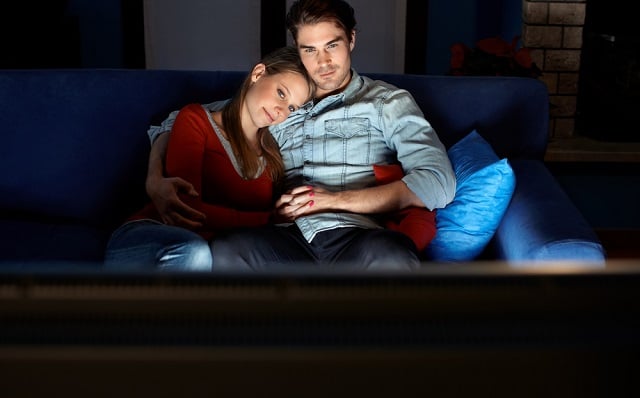 Snuggle up with an Italian romance. Photo: diego_cervo/Depositphotos
Roman Holiday (1953)
No list of romantic Italian films could be complete without a nod to Audrey Hepburn. In Roman Holiday, she plays a crown princess who sneaks out from her country's embassy and meets an expat reporter (Gregory Peck). The pair discover the city together, visiting Italian cafes and taking a Vespa tour around the capital together and like many of the films on this list, it's as much about love for Italy as it is about romantic love or desire.
READ ALSO: The stunning movie scene locations you simply have to visit in Italy
La Dolce Vita (1960)
Generally considered not only one of the best Italian romance films, but one of the best Italian films of all time, this Fellini classic follows a week in the life of a tabloid journalist as he searches for the elusive 'sweet life' in Rome. The iconic Trevi Fountain scene, when Anita Ekberg dances in the monument, is responsible for hundreds of tourists trying to replicate it each year, creating a headache for local security officers.

Sophia Loren and Marcello Mastroianni star in this romantic comedy, which tells three stories about couples across Italy: the working class husband and wife in Naples, the wealthy Milanese woman and her lover, and a sex worker in Rome.

This is not a traditional love story, but is a haunting one all the same. Based on the novel by Giorgio Bassani, this film tells the story of Ferrara in the late 1930s, as Benito Mussolini's Fascist regime and the racial laws slowly impinge on life in this small northwestern town, and on the relationship between teenage Giorgio and his neighbour Micòl Finzi-Contini, who he is in love with.

Set to a moving soundtrack, this movie tells the story of Enrico, a Venetian musician living with a terminal illness. He invites his ex-wife to come and stay with him, without telling her what's wrong, and the pair walk through the city while remembering their time together.

With an all-star cast including Liv Tyler and Joseph Fiennes and directed by by Bernardo Bertolucci, Stealing Beauty follows a 19-year-old American (Tyler) who travels to a Tuscan hilltop town after her mother's suicide, staying with family friends in a villa where she meets a selection of other guests. She has other reasons for going: solving riddles from her mother's past, and her own — she hopes to meet the Italian boy she fell in love with four years ago.

Italian housewife Rosalba gets left behind during a family coach holiday, but instead of waiting for her husband to come and get her, she starts to hitchhike back home, and halfway into the journey, decides to start a life for herself in Venice. This film has won over 30 awards and was an official selection at the Cannes Film Festival and the Toronto International Film Festival. The story touches on many different kinds of love, including romantic, family, and platonic relationships.

Under the Tuscan Sun (2003)
OK, so this one's an American film, but since it's basically a love story to rural life in Italy it deserves a place on the list. It follows the adventures of a recently divorced writer who buys a Tuscan villa in the hope of sparking change in her life, and will ring true to anyone who moved to Italy with similar intentions. Before you settle down in front of this flick, make sure to read The Local's interview with Frances Mayes, author of the bestselling autobiography the film is based on.
READ MORE: How Under the Tuscan Sun changed a small Italian town
Giorni e nuvole | Days and clouds (2007)
This film, from the director of Bread and Tulips, also looks at some of the everyday realities and struggles of love. A married couple in Genoa are forced to change their middle-class lifestyle when the husband loses his job, and the film follows the impact on their relationship as they move to a smaller house, sell their boat, and make other sacrifices for each other.
I am Love | Io sono amore (2009)
Tilda Swinton stars in this Italian-language film, the first of director Luca Guadagnino's 'Desire' trilogy, which concludes with Call Me by Your Name (on which more below). Swinton plays Emma, a Russian who has moved to Milan to live with her upper-middle class businessman husband but doesn't feel content with her new life. The scenery, aesthetics and soundtrack are beautiful, and the film tries to explore exactly what love is.
Call Me by Your Name (2017)
Directed by Italian Luca Guadagnino, this film is up for four Oscars this year so it's well worth a watch before the awards ceremony. Shot on location in Crema, Lombardy, the film tells the story of Elio, a 17-year-old American boy living with his parents in northern Italy, who has a summer romance with Oliver, a grad student who comes to work with his academic father. It stars a cast of American, French and Italian actors.