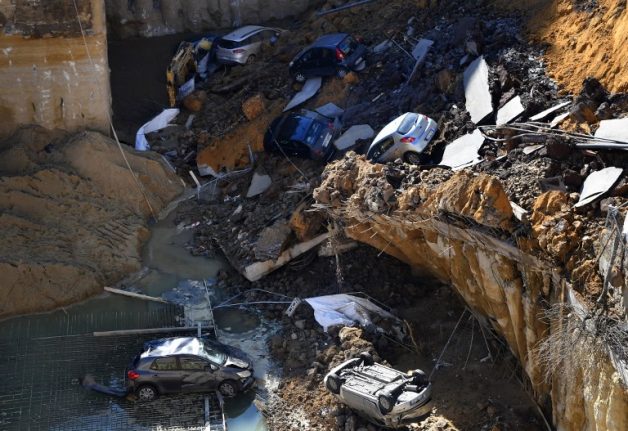 Fortunately, no injuries have been reported, but the area remained closed off on Thursday morning after a large part of the ground collapsed shortly before 6pm on Wednesday.

The sinkhole, measuring around ten metres deep, appeared in the Balduina district, a residential area northwest of Vatican City.

Seven parked cars were sucked into the chasm, and approximately 22 families evacuated from the residential area. “In the last few days while [construction workers] were working, I felt the floor of the house tremble and was very worried,” one resident told Italy's Rai News.

Rome, open city. You can't get more open than this.

“Two teams of firefighters worked throughout the night on the landslide,” said the Italian Fire Service.

“At the scene, it was arranged to evacuate two apartment buildings as a precautionary measure, secure the area, and assist the local population.” The road where the sinkhole opened up is marked on the above map.

Further stability checks were under way on Thursday morning, while firefighters are also working to establish the cause of the collapse.

The area is near a building site, where construction workers began demolition of buildings in October 2017 to make way for new residential buildings and underground parking space.

Works had been carried out in the same spot where the sinkhole appeared between January 25th and 28th, after reports of significant water leaks, which had however continued since the works. The sinkhole came after a day of rain in the Italian capital, which even saw some snow in the Roman outskirts. Rome's public prosecutor has opened an inquiry into the incident and will send engineers and geologists to establish what caused it. Two people were placed under investigation on Thursday for potential “culpable disaster”: the legal representative of the owners of the land, and that of the company responsible for the construction site where the sinkhole appeared.

Mayor Virginia Raggi said that authorities would find out where the responsibility lay. “Anyone who made an error will pay,” she told Italian media.

In 2016, a giant 200-metre sinkhole opened up in Florence after a water pipe broke, causing water to erode the road. Twenty parked cars were swallowed by that sinkhole next to the city's Ponte Vecchio, which was estimated to cost the city €5 million to repair.