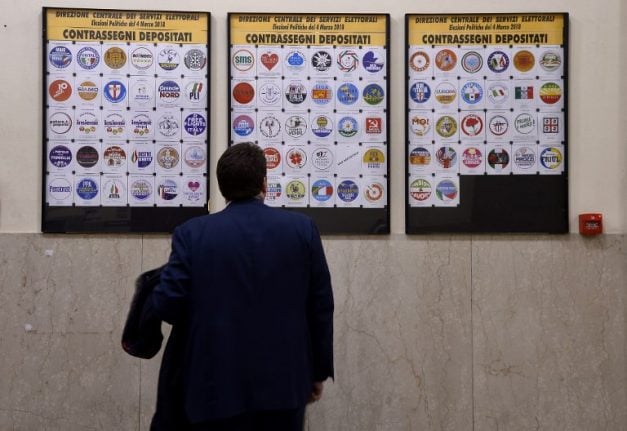 The success of the coalition, which includes the former premier's Forza Italia (Go Italy) party and two far-right groups, is in keeping with some European countries shift to the right in recent years against a backdrop of economic and migration woes.

The polls are the last to be released before the March 4th vote, with a ban on publishing survey predictions coming into effect on Friday evening.

YouTrend, which compiled the data from seven different polling institutes over the past week, puts Berlusconi's bloc way ahead of its competitors with 37.2 percent of the vote.

But a new voting law introduced in 2017 means this figure is still insufficient for a parliamentary majority.

Within the coalition, centre-right Forza Italia is predicted to get 16.8 percent of the vote. The anti-immigration Northern League, 13.2 percent and the far-right Fratelli d'Italia (Italian Brothers), 4.7 percent. Berlusconi, 81, is unable to run for the top job again due to a tax fraud conviction.

Behind the group, the populist Five Star Movement (M5S) is expected to get 27.8 percent.

While the anti-establishment group is the leading single party, it would need to make alliances to form a government, an option it has so far refused to consider.

The left-wing coalition, which includes the ruling Democratic Party, is predicted to come a close third with 27.4 percent of the vote.

Uncertainty has dominated throughout the electoral campaign in a country where political mistrust is widespread.

“It would take a magician to predict today what will happen in 15 days,” said Antonio Noto, a polling expert. “Ten million voters have still not decided whether or not to vote and who they would vote for.”

In 2013, the M5S went from polling at 20 percent in the last surveys published two weeks before the election to 25 percent on election day.

“Seven percent of the people who went to vote changed their minds in the polling booth and voted for a party other than the one they originally thought they were voting for,” said Noto of the 2013 election.

A hung parliament remains the most likely outcome. If no majority emerges, Italy's President Sergio Mattarella has the power to keep the current government in place until a way forward is found.