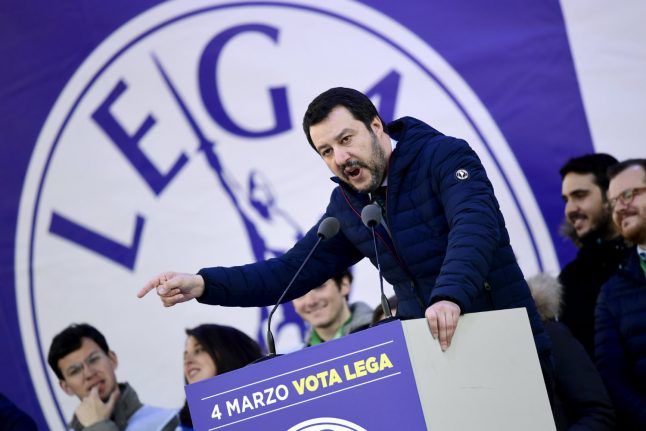 As leader of the far-right League, the 45-year-old has got his hands on national security and public order, allowing him to focus on some of the chief aspects of his rabble-rousing election campaigning – stopping illegal immigration and deporting those who have already arrived.

Salvini will become interior minister after striking a last-gasp deal to resurrect a coalition with Five Star Movement head Luigi Di Maio, an agreement that has now brought Italy a populist government after nearly three months of post-electoral deadlock.

He took control of the rightwing coalition that won the most votes in March's election when his League party surpassed ally Silvio Berlusconi's Forza Italia.

Since taking over the old Northern League in 2013, Salvini has ridden a wave of public discontent, playing on anti-immigrant sentiment as he sought to shift the party's image from defender of the wealthy north against its “parasite” south, to that of guardian of Italy's national sovereignty.

Now he's heading into government with southerner Luigi Di Maio and the Five Star Movement, which picked up the vast majority of its seats in the south.

Since Salvini took over the League, nearly 700,000 people have landed in Italy after crossing the Mediterranean sparking a sense of resentment among many Italians who feel Europe has abandoned them – a sentiment which he has successfully exploited.

Salvini, who in 2009 was caught on video singing songs about “stinking” Neapolitans and in 2012 said the south didn't deserve the euro, represents impoverished southern region Calabria in the Senate and has redirected his regional chauvinism to take the League nationwide.

Born and raised in Milan in 1973, Salvini joined what was then the Northern League in 1990, aged just 17, rising quickly through the ranks.

At the time, the Northern League was a regional party known for its separatist campaign to secede from Italy. Salvini made his name while running its Radio Padania, the wealthier northern region they wanted to see independent. One of his shows was called “Never Say Italy” and in 2011, he won notoriety for boycotting Italy's 150-year anniversary celebrations, putting his desk outside Milan city hall to show he was working.

“The Tricolore doesn't represent me,” Salvini said of the Italian flag in 2014.

But by 2018, he was campaigning as far south as Matera in the impoverished Basilicata region, where he promised “order, rules, cleanliness” and railed against “out of control” immigration.

In a recent video on his Facebook page, which has more than two million fans, Salvini said he would work to “stop the landings” once in power. He opposes same-sex unions, wants to deport foreign criminals and to bulldoze Roma camps.

And as talks were under way to form the new government, he posted a photo of himself standing next to a bulldozer on Twitter with the message: “We're working for you.” Since taking over the League, Salvini has forged alliances with other far-right Europeans like France's National Front and Dutch anti-Muslim politician Geert Wilders.

Despite positive words for Russian President Vladimir Putin, Salvini in 2013 called the EU a “gulag” like the “Soviet Union” saying he would work to try and leave it.

He has kept immigration high on the agenda, and has pointed the finger at “an invasion” as responsible for the racist gun rampage in February in central Italy in which a self-proclaimed fascist shot six Africans.

A savvy social media user, he has managed to successfully push his agenda online, updating his followers daily with constant updates, live videos, photos and even pictures of what he eats.

Although happy to talk about his two children – 14-year-old Federico and Mirta, five – he is less happy to discuss his complicated love life. Currently living with glamorous model and TV presenter Elisa Isoardi, his children are from two previous relationships, one with ex-wife Fabrizia Ieluzzi, a political journalist, and the other with former girlfriend Giulia Martinelli.