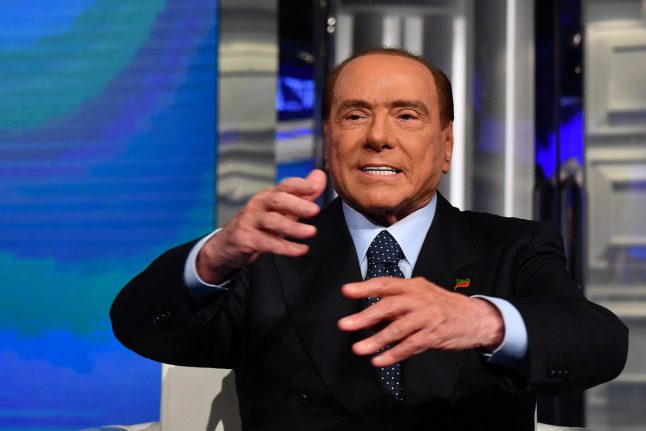 Silvio Berlusconi speaks on the set of the broadcast "Porta a Porta", a programme of Italian channel Rai 1, on January 11th, 2018. Photo: AFP

Despite sex scandals, serial gaffes and legal woes, the flamboyant tycoon has made an astonishing return from political oblivion to head his centre-right Forza Italia (Go Italy) party, which as part of a rightwing coalition is leading the race for the March 4th vote, according to opinion polls.

“Berlusconi has 12 or 13 lives, he's like a cat squared,” said former premier Matteo Renzi, who is himself trying to win back the top spot next weekend.

Although barred from public office owing to a tax fraud conviction, Berlusconi is hoping to position himself as kingmaker in the next government if his coalition wins a majority in parliament.

While he has avoided the big campaign rallies in the run-up to the vote, he is a constant figure on television and radio stations and in newspapers, a number of which he owns through his Fininvest empire.

The one-time cruise ship crooner who has served as prime minister three times and once owned AC Milan has had a tumultuous love affair with Italian politics, clinching his first election victory in 1994. He has ruled Italy for more than nine years in total.

He became renowned around the world for his buffoonish gaffes, friendships with the likes of Russian President Vladimir Putin and late Libyan dictator Muammar Gadhafi, and a colourful private life epitomised by his notorious “bunga bunga” sex parties.

Today, his smile is noticeably a little frozen, the facelifts and make-up laid on “as thick as the carpet,” according to an editorial from La Repubblica newspaper, have left the veteran leader somewhat transformed.

But his sense of humour is still in tact. “I'm like a good wine, with age, I only improve, now I'm perfect,” he tweeted recently.

Berlusconi was born in 1936 in Milan to a bank employee father and a housewife mother who always staunchly defended her son's virtues.

The young Berlusconi was a born entertainer.

A huge fan of Nat King Cole, he played double bass and entertained club audiences with jokes during breaks from studying law.

He worked briefly as a cruise-ship singer before launching a lucrative career in the booming construction sector and then expanding to set up three national television channels and buy Italian football club AC Milan, which he went on to sell in 2017. Berlusconi's political success has been linked to his football glory. But it is also closely entwined with the power of his broadcasting and publishing empire.

His first stint as prime minister lasted from 1994-1996. In 2001, he was elected again after a campaign which included sending a book boasting of his achievements to 15 million Italian homes.

He remained in power until 2006 — the longest premiership in the history of post-war Italy — and as a divided left floundered, he was voted back in for a third time in 2008.

But his premiership ended in 2011 in a blaze of sex scandals and fears Italy was on the brink of a Greek-style financial implosion.

He nearly mounted a comeback two years later, winning almost a third of the vote with an energetic campaign that, as ever, played up his reputation as a winner — on the football pitch and in the boardroom.

But the man the Italian press dub “the knight” has been unable to escape the clutches of judges determined to nail him.

The twice-divorced Berlusconi was forced out of parliament in 2013 after his conviction for corporate tax fraud was upheld by Italy's highest court. He said at the time he would not “retire to some convent”.

But his influence waned quickly after he was given a community service order that he served out working with Alzheimer's sufferers one day a week in an old people's home.

READ ALSO: Who's who in the Italian election? In 2013 he was also sentenced to seven years for paying for sex with an underage 17-year-old prostitute Karima El-Mahroug, known as “Ruby the Heart Stealer”, and for abusing his powers to get her off theft charges, pretending she was the niece of then Egyptian president Hosni Mubarak.

The Ruby conviction was eventually overturned by an appeal court. Not entirely off the hook though, Berlusconi now faces trial over allegations he bought Ruby and other women's silence with more than ten million euros worth of gifts including houses and holidays.

The former leader has gained notoriety for his off-colour jokes and diplomatic gaffes, in 2013 likening German politician Martin Schulz to a Nazi, and describing US President Barack Obama as “suntanned”.

The now ageing politician has slowed down during the current electoral campaign, with a continuous flow of TV appearances but almost no public event.

When asked about his eventual successor though, he responded: “It's not easy to find a genius, but as I'll live to be 120, I will find one.”