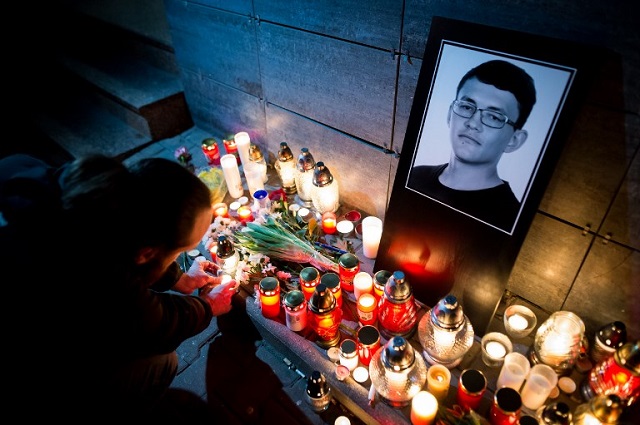 A memorial to journalist Jan Kuciak in his newsroom. Photo: Vladimir Simicek/AFP

Opposition politicians have demanded the interior minister and police chief step down, accusing them of failing to protect Kuciak when he filed criminal complaints after receiving threats.

Kuciak, 27, and his fiancee Martina Kusnirova were found shot dead on Sunday at his home in Velka Maca, a town to the east of Bratislava, raising concerns at home and abroad about media freedoms and the level of corruption in Slovakia. “Two people from the circles of a man who came to Slovakia as someone accused in a mafia case in Italy have daily access to the country's prime minister,” Kuciak wrote in the article titled “Italian mafia in Slovakia. Its goblins extend into politics.”

“Italians with ties to the mafia have found a second home in Slovakia. They started doing business, receiving subsidies, drawing EU funds, but especially building relationships with influential people in politics — even in the government office of the Slovak Republic.

“They owned or still own dozens of companies. Their property is worth tens of millions of euros.”

Slovakia's leading SME broadsheet had first revealed details of Kuciak's investigation on Tuesday. The report triggered an angry rebuke from Fico, who showed reporters stacks of euro bills totalling the one million euro ($1.2 million) reward he has offered for information that could lead to the killers.

“Do not link innocent people without any evidence to a double homicide. It's crossing the line. It's no longer funny,” he warned.

The Kuciak shooting followed the October murder of campaigning Maltese journalist Daphne Caruana Galizia — who exposed crime and corruption on the Mediterranean island — in a car bombing.

Police commander Tibor Gaspar, who has said the motive was “most likely” related to Kuciak's investigative journalism, warned reporters that publishing details of the case could tip off suspects. But conservative opposition MP Igor Matovic called for Gaspar and Interior Minister Robert Kalinak to step down.

“Kalinak and Gaspar bear the responsibility for the security of people in this country and due to their failure to prevent this brutal assassination they should step down,” he told reporters.

Tom Nicholson, a British-born investigative journalist who worked closely with Kuciak, wrote in an article for Politico that “the (Slovak) secret service already has the gangsters' names; both Jan and I were operating from leaked intelligence documents”. “Slovak organized crime has never killed reporters, even in the bad old days. Whereas Italy's mafia gangs have shown no such compunctions,” Nicholson said.

Political analyst Grigorij Meseznikov told AFP the murder and its possible links to the Slovak political elite “could prompt a political earthquake”.

“A red line has been crossed. This case could shake the electorate of the governing SMER-SD party to its foundations.”

Fico, who once told journalists they were “dirty, anti-Slovak prostitutes”, met the editors of top Slovak media outlets on Tuesday to assure them of his government's commitment to the “protection of freedom of speech and the safety of journalists”.

Candlelit vigils have been held for the slain couple, with a steady stream of people visiting a makeshift memorial in Bratislava.

“We thought we lived in a democratic country and now we see young people die for the truth and problems remain unresolved,” Bratislava resident Magdalena Socanska told AFP.

Anti-corruption protests are being planned in the capital on Wednesday and Friday, after thousands of mostly young Slovaks joined similar rallies last year demanding the dismissal of senior government and police officials for alleged foot-dragging on fighting graft.

By Laszlo Juhasz and Martina Konik