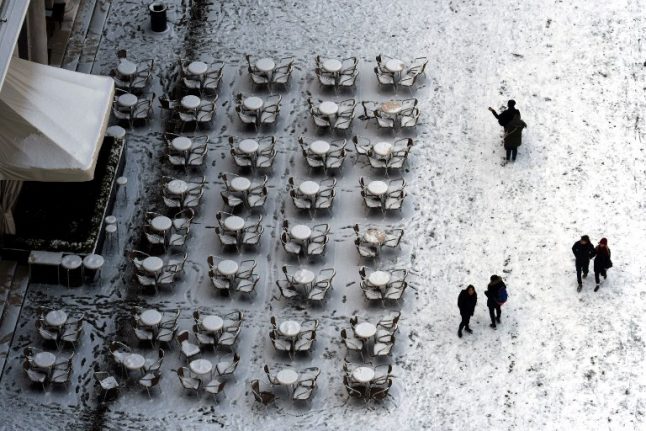 The late-winter snowfall continued into March, with the heaviest snow in the northern cities of Turin, Cuneo, Bologna, Parma and Reggio Emilia. Temperatures in the north were barely expected to climb above zero on Thursday. In Florence, where around 2cm fell, schools were given a snow day. There was even heavier snowfall across other parts of Tuscany, where the region's rolling hills and even the beaches of its north-west coast were covered.

The A1 motorway between between Arezzo and Chiusi was closed on Thursday morning because of the icy conditions, but reopened around an hour later.

The worst disruption was to the rail network, with half of all regional trains cancelled in Piedmont, Veneto, Emilia Romagna, Liguria and Tuscany. Four other regions – Lombardy, Friuli Venezia Giulia, Le Marche and Lazio – had only 70 percent of services, and the Milan-Rome-Naples high-speed line was running at 80 percent.

It makes three days of rail disruption across Italy, which Transport Minister Graziano Delrio put down to “errors” on the train companies' part.

“They overestimated their capacity and wanted to try and keep all the trains running,” he said. “If they'd followed [cold weather] protocol the disruption would have been minor.”

According to RFI, the company that manages Italy's tracks, service should return to normal from Friday.

Commuters aren't the only ones suffering from the snow: according to farmers' association Coldiretti, the cold spell issued in by the arrival of freezing winds from Siberia could end up costing Italian agriculture some €300 million.

Not only are famers losing crops to the cold weather, Coldiretti said, but produce is rotting as the road and rail disruption prevents it being delivered. What's more, fruit trees teased into early bloom by exceptionally warm temperatures just a few weeks ago now stand to be devastated by the frost.

Livestock are also at risk, with farmers fearing that animals may die or miscarry from exposure.

The snow is expected to continue into Friday across north-west Italy, where temperatures will remain low. There will be rain and thunderstorms across parts of the centre and south, but the mercury should begin to climb at least a little.