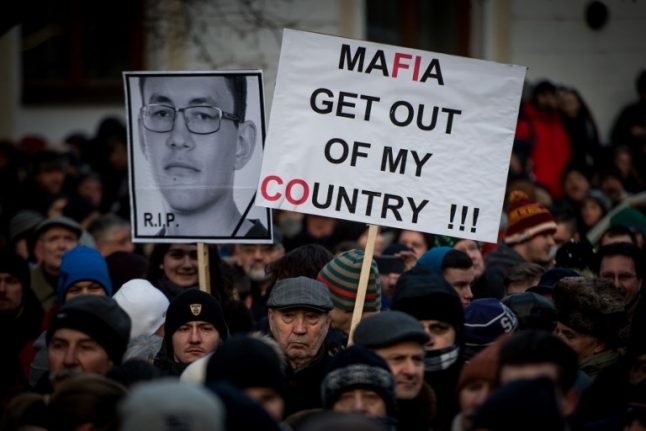 Prosecutors in Italy suggested that the notorious Calabrian crime syndicate the 'Ndrangheta may have been behind the killing of Kuciak, 27, and his fiancee Martina Kusnirova, who were found shot dead at their home near Bratislava on Sunday.

Slovak police commander Tibor Gaspar told reporters that the individuals taken into custody during raids in the eastern town of Michalovice were “persons mentioned” by Kuciak in connection with the “Italian track”.

Slovak media reported that among the seven held was Italian businessman Antonino Vadala – the owner of several companies – and some of his relatives, alleged by Kuciak to have links to 'Ndrangheta and contacts in the Slovak government.

The prosecutor in the Italian region of Calabria, Nicola Gratteri, told Italian radio meanwhile that “it is likely that the families of the Calabrian mafia are behind the murder” of Kuciak.

“It is obvious that 'Ndrangheta is capable of this,” he said.

He was echoed by Italy's anti-mafia prosecutor, Gaetano Paci, who called the journalist's murder a “milestone”.

“It shows that the 'Ndrangheta is starting to be afraid of those who want to show a truth that many are struggling to see,” he told told Italy's Rai News TV.

The murder has raised concerns about media freedom and corruption in Slovakia and sparked international condemnation.

In an angry rebuke of the allegations, Fico showed reporters fat stacks of cash totalling €1 million – a reward he has offered for information that could lead to the killers.

A candlelit protest in the capital Bratislava called by an opposition party drew around 1,000 people on Wednesday night. Other anti-corruption protests and memorials are planned for Friday across Slovakia and in Prague, London and The Hague. A memorial to journalist Jan Kuciak in his newsroom. Photo: Vladimir Simicek/AFP

Fico accused the opposition Wednesday of using the murder as a “political tool to get people out on the streets and gain power”.

The European Commission formally asked Bratislava on Thursday to account for the use of EU farm subsidies after Kuciak's report alleged that some of the suspects police detained on Thursday had been skimming funds.

In his posthumously published report, Kuciak wrote: “Italians with ties to the mafia have found a second home in Slovakia. They started doing business, receiving subsidies, drawing EU funds, but especially building relationships with influential people in politics – even in the government office of the Slovak Republic.”

Troskova, 30, and Fico's national security council officer Viliam Jasan, both of whom allegedly had past dealings with Vadala, said on Wednesday they had given up their posts for the duration of the murder investigation, but
“categorically rejected” any wrongdoing.

Maria Troskova, a close Fico aide, was forced out on Wednesday after Kuciak alleged she had ties to Vadala, purportedly involved with 'Ndrangheta.

Interior Minister Robert Kalinak said on Facebook on Thursday that Italian police, Europol, the FBI and Scotland Yard had pledged to help with the investigation.

Marek Vagovic, the head of the team of investigative journalists at aktuality.sk, told AFP that Kuciak's murder was “the end of an era” in Slovakia.

“This murder will change the atmosphere in Slovakia in a way that there will be much harder pressure on the investigation of serious crimes, on revealing corruption and clientelism, on revealing interconnection of politics and business.”

Journalists investigating the same story as Kuciak said they have obtained police protection.

Fico, who once told journalists they were “dirty, anti-Slovak prostitutes” and used terms like “plain, silly hyenas” and “slimy snakes” to describe the media, has vowed his government is committed to the “protection of freedom of speech and the safety of journalists”.