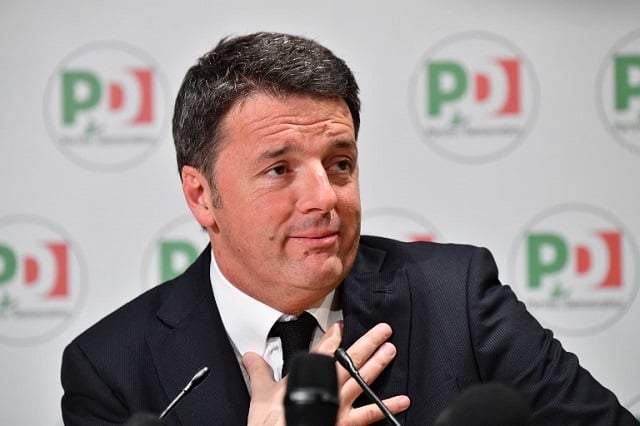 His decision to quit as party head is an alarming change in fortune for a man who just a few years ago was hailed as a reformer when he became Italy's youngest prime minister at the age of 39 in 2014.

The centre-left coalition led by Renzi's Democratic Party (PD) picked up just 22 percent of the vote, lagging behind a right-wing coalition that won 37 percent and also trailing the Five Star populist movement which scooped up 32 percent of the national vote.

The PD's collapse is a huge blow to Italy's centre-left, in power since 2013, effectively ruling it out of having any say in the country's future government.

The result is also particularly humiliating for Renzi, whose party clinched 40 percent of the vote in the 2014 European elections. Announcing his departure from the post, he said he would content himself with his new role as senator in his native Florence. Often accused of an arrogant or authoritarian leadership style, the former premier never managed to deliver on his ambitious promises to revamp Italy and cast away the political old guard during his time at the helm.

In 2012, with his sights set on party leadership, he vowed to make Italy more meritocratic. But today he is often accused of surrounding himself with his chosen few, frequently fellow Tuscans, who have done little to boost his reputation.

Renzi, whose only previous governing role had been as mayor of Florence, became prime minister in 2014 aged just 39.

Showing a tireless work ethic while his wife, Agnese, and three children stayed home in Tuscany, the former boy scout who became known as “the scrapper” came to office with a vow to revive Italy's lethargic economy.

He managed to deliver his flagship labour market reforms and modest growth, while overseeing the granting of legal recognition to gay relationships for the first time. But the recovery was not strong enough to generate any real political dividends.

Renzi alienated many on his party's far left, who broke away in 2017 to become part of the leftwing “Liberi e Uguali” (Free and Equal) alliance, also candidates in the upcoming vote.

His domestic fall from grace came in December 2016, when Italians rejected his flagship proposal for constitutional reform in a referendum.

His dream of a “simpler, more competitive and more courageous” Italy in tatters, Renzi resigned as prime minister. Despite taking a backseat, the energetic reformer maintained a strong media presence and few doubted his desire to return to the top spot.

However, the disappointing result in Sunday's election meant Renzi did not get the second chance he had hoped for.