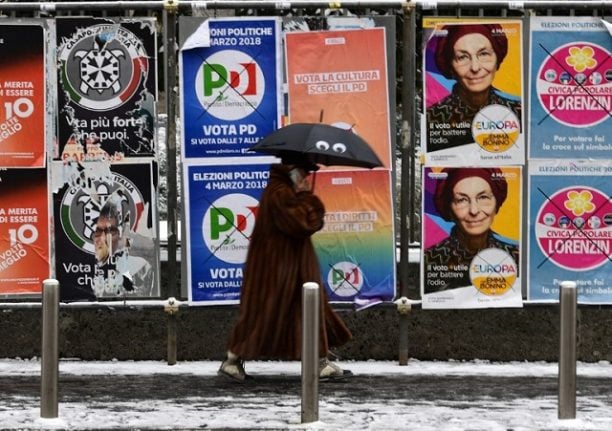 Italians abroad can vote either for candidates in their home constituency, or for those standing for the overseas constituency, meaning they have slightly different options on their ballot papers compared to those living in Italy.

And while the majority of the population will head to the ballot box on Sunday March 4th, Italians send in postal votes in advance, so the people we spoke to had already made their decision.

Here's a selection of the views from the voters we spoke to.

'We need to see what the Five Star Movement can do'

“I have trouble listening to all the promises and the lies,” said Rosamaria, an Italian-American who now lives in Germany. “Watching from here, where things function efficiently, has only furthered my belief that Italy is in bad shape.”

She cited her main concerns as the high unemployment rate, particularly among the young, high taxes for small businesses; and problems in the education system. In particular, Rosamaria is disillusioned by “the old school politicians”, including Silvio Berlusconi and Matteo Renzi. Renzi, she points out, promised to resign if he lost the 2015 referendum, and though he did quit his job as PM, he still leads the Democratic Party and is running for PM. Meanwhile, Berlusconi is barred from holding public office so won’t get a fifth term, but could end up as kingmaker after putting together a coalition that was leading in the final pre-election polls.

She sees the Five Star Movement, formed in 2009 and led by Luigi Di Maio, are “the alternative to the traditional parties”, she tells The Local. “We need to see what they can or will do. I don’t believe they are perfect but I do believe in their desire to change the things that are not working.”

'I just hope the outcome doesn't cripple the economy'

Tommaso Leso moved to Ghent, Belgium in 2014 after previously spending a year each in France and England. He has been following the election mainly online, using news sites as well as content shared on social media, predominantly by Italian and international journalists. Two things he hasn't had access to while abroad, however, are personal interaction with people from different socio-cultural backgrounds, and Italian TV. “The former is something I miss – it would have helped having a more clear picture of “the real country”. The latter is something I really don't miss – the quality and average level of those shows is appalling,” he says.

Leso’s main concern is the economy. “I am desperately hoping for an outcome that does not cripple the Italian economy beyond the possibility of repair, nor destroys the remnants of a liberal democratic culture,” he says. “In my mind, this excludes almost all the parties in the political spectrum right now.”

However, he's sceptical about the grand promises made by most of the parties, which he says “mean next to nothing.”

He has voted for the Democratic Party in the Senate and Emma Bonino’s +Europa in the Chamber of Deputies, a choice he says he made through a process of exclusion.

However, Leso believes the most likely outcome is a victory for Silvio Berlusconi’s centre-right coalition, which he says could be “disastrous”, particularly due to the wide rifts in opinion between Berlusconi’s Forza Italia and the other two coalition partners.

“They don't agree on a lot of things, and the government might be short-lived or, worse, paralyzed.”

'I get so angry about Italian politics I avoid it'

Veruska Anconitano, an Italian journalist and blogger in Ireland, says that none of the candidates standing for office appealed to her, so she has chosen not to vote in the election.

Although Italy has traditionally had a high turnout in national elections, regional and local votes over recent years have seen a dwindling turnout as more and more Italians grow frustrated with all sides and opt to vote with their feet. A woman looks at the board bearing the parties' logos. Photo: Filippo Monteforte/AFP

This year, the turnout is expected to be down on the 2013 election.

Anconitano says she has avoided media coverage of the election: “Every time I read something, I get so annoyed and angry I prefer to avoid it. I live abroad out of choice, and I want to vote in the country where I live and where I pay taxes.”

'I care about employment, Europe, and immigration'

“The most important themes in the election for me are the question of work, the relationship with Europe, and management of immigration,” says Silvano Garnerone, who has lived in Stockholm for ten years.

He has voted for the centre-left coalition led by the Democratic Party.

“I made by decision by choosing what I believe to be the programme and the people that best balance the political desires and the obligations of history and geopolitics,” Garnerone said.

'None of the parties match my ideas'

Antonio Consoli, an Italian who has lived in North and South America, the UK, and Sweden, tells The Local: “Living abroad opens your eyes on reality. It makes you love some things more while it decreases your tolerance for other things that you were more likely to accept back home.”

In particular, he says his tolerance for bureaucracy has decreased, though he argues that the Italian healthcare system is of a higher quality than in most other advanced economies.

He didn't want to share who he had voted for, saying “the decision was not an easy one, as none of the parties are a good match with my ideas. But I have checked carefully the profile of the people that I voted for.” However, the 43-year-old criticizes the “sensationalism” of the campaign, and wishes there had been more measurable targets and ambitions focused on how each party would tackle problems such as corruption and rising unemployment among young people and in the south.

“The country must strive to develop an industrial economy in the less developed southern areas. I remember Catania Industrial area, 20 years ago, was flourishing with many tech startups that were born around a university and a few multinational companies, such as Nokia and ST. Catania was called “Etna valley”. Today that area looks more like an industrial desert,” he says.

“Companies left for more convenient areas and there is little interest to invest there for many reasons (lack of infrastructure, lack of security, lack of skilled resources, no favorable taxation to compensate the required investments …). Catania is an example of what the South of Italy was and could become. Only the promise that education can land you a job can give an opportunity to children that are in school today.”

HAVE YOUR SAY: What do you think about the Italian election? Get in touch at [email protected] or via our Facebook or Twitter pages. We'll include some of your opinions in our live blog of the election on Sunday.