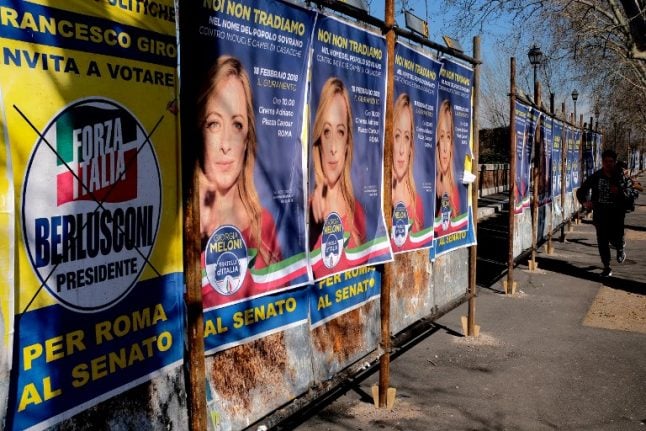 Election posters in Rome last month. Photo: AFP
Here are the main groups' positions on key issues:
Berlusconi's coalition
Former prime minister Silvio Berlusconi is back on the political scene leading his centre-right Forza Italia (Go Italy) party in coalition with two far-right parties: the League, headed by Matteo Salvini, and the smaller Brothers of Italy led by Giorgia Meloni.
The right-wing coalition was ahead in the final opinion polls published last month, but it is an uneasy alliance.
They agree on immigration, which is key to the coalition's political agenda, promising not only to stop migrants from arriving in Italy but also to deport hundreds of thousands.
They are also pledging to wage war on austerity, invest in the labour market and renegotiate EU fiscal rules which punish high-debt countries such as Italy.
The coalition has proposed a controversial flat tax but has squabbled over the rate. While Berlusconi has put the rate at 23 percent, Salvini is promising just 15 percent.
Berlusconi is more clearly pro-European and has put forward European Parliament President Antonio Tajani as his nominee for premier if he wins while the eurosceptic Salvini has prime ministerial ambitions of his own.
Five Star populists
The anti-establishment Five Star Movement (M5S) is the single leading party in the polls, with around 28 percent support, but they fall way short of an absolute majority needed to govern.
Created in 2009 by outspoken former comic Beppe Grillo, the populists have risen to prominence amid an outpouring of frustration and anger with mainstream political parties.
M5S leader Luigi Di Maio has recently softened the party's tone on Europe, abandoning the idea of a referendum on dropping the single euro currency. Instead, they have gone big on a universal basic income scheme, a proposal which has made them particularly popular with young voters in a country where unemployment for those aged 25-34 runs at 17 percent.
They are also pledging income tax cuts and pension hikes and have promised to slash Italy's infamous red tape for businesses.
Their solution to the migrant crisis is to forge bilateral agreements with the countries of origin for the repatriation of illegal immigrants.
They also hope to win the family vote with the offer of reimbursing childcare costs and nappies.
Centre-left bloc
Former premier Matteo Renzi looks unlikely to win back the top spot with his ruling Democratic Party and three other smaller groups.
The centre-left bloc, which is lagging behind the right and the M5S in the polls, is going big on measures to combat Italy's struggling economy.
It proposes tax cuts for businesses, families and the country's poorest, as well as the introduction of a guaranteed minimum wage and investment in infrastructure, research and education.
Unflashy Prime Minister Paolo Gentiloni of the Democratic Party has been praised for his steady handling of the economy and has captured the political centre ground. He got a boost this week from a series of positive economic results including 1.5 percent growth last year and a sharp fall in the public deficit to 1.9 percent of gross domestic product — its lowest level in a decade.
The pro-EU bloc is also calling for the creation of a “United States of Europe,” for the president of the European Commission to be elected by a Europe-wide direct vote, and for the creation of a finance minister for the eurozone.
The bloc wants migrants to be distributed among the EU states and is also pushing for integration measures.
Url copied to clipboard!