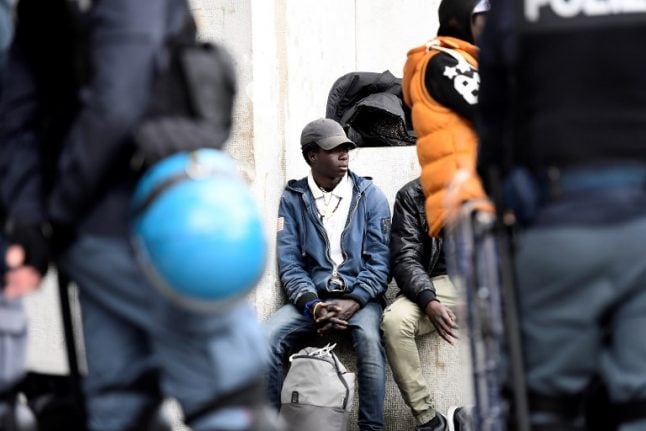 Italian police officers surround immigrants during an identity control operation at Central Station in Milan on May 2, 2017. PHOTO: MIGUEL MEDINA / AFP
The grouping is committed to deporting hundreds of thousands of migrants who have arrived by boat since 2013 and far-right League leader Matteo Salvini has promised to expel foreign criminals and shut down Roma camps.
Here are four commonly held beliefs about immigration heard during the campaign compared with facts and statistics on the issue:
'Too many of them’
Italy's national statistics institute Istat says that there are five million foreign nationals legally residing in Italy. That is 8.3 percent of the country's population of 60.5 million.
The biggest proportion, 23 percent, are from Romania followed by Albanians (9 percent), Moroccans (8 percent), Chinese (5.5 percent) and Ukrainians (4.5 percent) and many of them are employed in retail, farming or domestic work.
SEE ALSO: The Local's complete guide to the Italian election
More than 690,000 migrants, most from Sub-Saharan Africa, have arrived by boat from Libya since 2013. Migration study foundation ISMU estimates that around 500,000 are living in the country illegally — equivalent to 0.9 percent of the population.
'They cost us money'
Government figures put the cost in 2017 of migrants arriving via Libya at more than €4.2 billion ($5.2 billion), of which 65 percent was spent on taking care of asylum seekers during their convoluted application process.
Eighteen percent of that figure was for sea rescue and 13 percent for medical assistance.
In 2013, there were 22,000 people in asylum centres. That number was at 182,000 in January.
'They bring crime'
On Thursday Berlusconi spoke of Italians being more worried about security now than at any time since the Second World War, while at a recent rally in Padova, Salvini said that “the League is the solution” to “a tide of of delinquents”.
However Italy's interior ministry says the crime rate has dropped by 8.3 percent in the last 10 years, despite the fact that the number of foreigners in the country has increased from three to five million over the same period.
Figures presented by the ministry showed that in 2017 murders dropped by nearly 12 percent, robberies by 11 percent and burglaries by nine percent.
'It's an invasion'
The impression created by some far-right politicians of a growing number of migrant arrivals is wrong. A controversial agreement signed by Rome with the Libyan authorities and militias last summer reduced arrivals by 70 percent.
The government also oversaw a 12 percent increase in expulsions last year, from 5,817 in 2016 to 6,514.