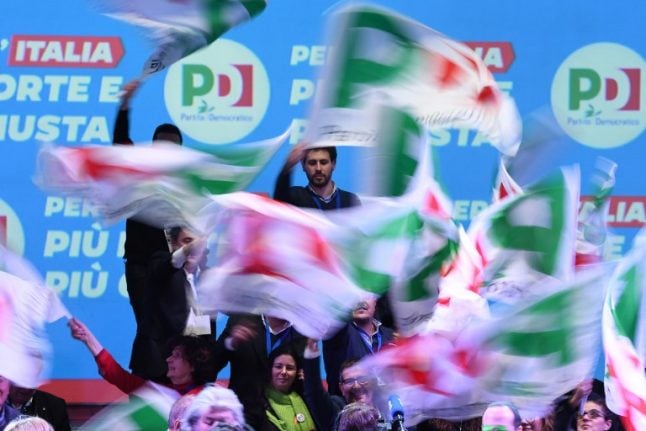 Supporters of the centre-left Democratic Party wave flags during the last election campaign meeting in Florence on Saturday. Photo: Claudio GIOVANNINI / AFP
The election looks like a three-way race between a right-wing coalition led by former prime minister Silvio Berlusconi, the anti-establishment Five Star Movement and the centre-left Democratic Party.
See The Local's complete guide to the Italian election
The final polls issued before a campaign ban came into force last month put billionaire Berlusconi's coalition in front, with 37 percent. But they also predicted that the bloc would fall short of the majority required to form a government.
Under the complex electoral law introduced last year, one third of seats in parliament will be attributed on a first-past-the post basis while the remaining two-thirds are divided up by proportional representation.
The new law favours coalitions and limits the chances of the populist Five Star Movement (M5S), which has ruled out any post-election deal with other parties, but it has made it difficult to predict the margins needed to take power.
According to Roberto D'Alimonte, an expert on electoral systems at Rome's Luiss University, a party or coalition will need 40 percent of the proportional vote and 70 percent of the first-past-the-post vote to obtain a majority in the 630-seat lower house.
“These elections are a lottery. This has been the case before but never like now,” D'Alimonte wrote in the business daily Il Sole 24 Ore.
In order to win control of the 315-seat Senate, a party or coalition must obtain 50 percent of both the first-past-the-post and the proportional vote.
Both houses of parliament carry the same political clout with the same powers to adopt and amend laws, but they are elected differently. To be elected to the lower house, a party must win at least three percent of the national vote, and a coalition must bag 10 percent, with any one party within the alliance garnering at least three percent.
Party leaders are also playing political chess in a bid to get their candidates into place by putting them on the ballot in different constituencies.
Candidates can be placed on the ballot in a maximum of five different constituencies for the proportional vote. This is not true of the first-past-the post vote however, where candidates can only run in one constituency.
Url copied to clipboard!