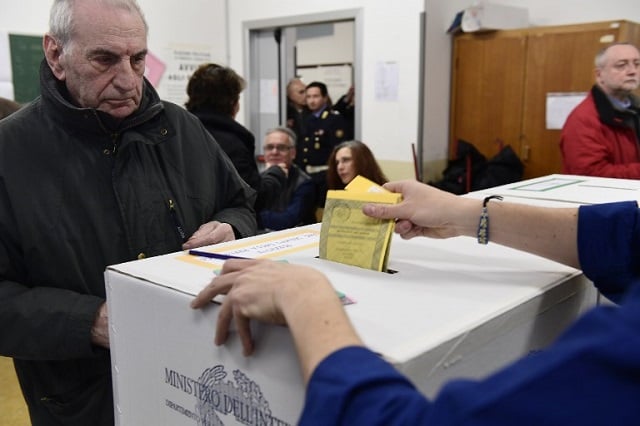 As one who has been a student of Italian politics for a number of years now, I am struck by the striking novelties of the election campaign that has just come to an end. For one thing, the parties’ policy platforms have had a much higher profile than in the past.

Prior to the collapse of the Berlin Wall, policy counted little: voters were mobilized essentially by the fundamental ideological division running through Italian politics; elections were “Christ-versus-communism” affairs.

Since one of the two largest parties was a communist party and therefore considered ineligible for government, and since the party furthest to the right – the neo-fascist Italian Social Movement – was likewise excluded, the only feasible governing coalitions were ones with the centre-placed Christian Democrats (DC) as their mainstay; so elections were largely about the relative strengths of the DC and its minor-party allies as the permanent incumbents.

Then, with the end of communism and the party-system transformation that ensued, elections were essentially contests between two prime-ministerial candidates, one of the centre left the other of the centre right, each competing for overall majorities of seats. Campaigns were essentially about which of the two coalitions had the most attractive leader – a context in which Silvio Berlusconi came into his own, of course.

All that has now changed. Now we have not two, but three main contenders, and of these, only one – the Five Star Movement – has been able to offer voters a candidate prime minister: the youthful and charismatic Luigi di Maio. The centre right has been unable to do so thanks to the relative strengths, as revealed by the poll numbers, of the component parties. Thanks to these numbers, for several months, Berlusconi and the League’s Matteo Salvini have been competing for leadership of the coalition; and though his party appears to be slightly ahead of the League, Berlusconi himself is ineligible for the office of Prime Minister thanks to his 2013 conviction for tax fraud.

On the centre left, the current prime minister, the Democratic Party’s (PD’s) Paolo Gentiloni, is not the leader of his party and so has been unable to translate his not inconsiderable personal popularity into support for the PD, while the party’s actual leader, Matteo Renzi, is unpopular thanks to his evident ambitions to concentrate power, internally and in the wider political system, in his own hands.

Consequently, notwithstanding the mediatization of politics, and the personalization of campaigning that has been its concomitant in the early twenty-first century, paradoxically, the Italian parties have in 2018 had to find alternative bases on which to appeal to voters – and they have used a heavy emphasis on their programmes in order to do so.

Here we encounter the second peculiar feature of the campaign. Since they have been aware that none of them look at all likely to emerge from tomorrow’s vote with an overall majority, and therefore that the composition of the incoming government will have to be decided by inter-party bargaining once the results are known, more or less all of the parties and coalitions have been engaged in a politics of outbidding, knowing that they will be able to escape responsibility for any failure to deliver on promises – which they will be able to attribute to the obstruction of coalition partners.

According to an analysis carried out last month by the Osservatorio Conti Pubblici Italiani, the level of public debt, instead of coming down from the high point of 131.6% of GDP reached in 2017, would go up by 7 percentage points over five years in the event of the Five-star Movement’s programme being realized; 6 in the case of the League’s programme; 4.2 in the case of the measures announced by Berlusconi’s Forza Italia, and 3.2 in the case of those desired by the PD. An Italian casts his vote in a previous election. Photo: AFP

All four of these parties seem to have been driven by a similar narrative: more spending on this or that equals more consumer demand equals economic growth equals more tax revenues equals a reduction in the public debt. Mario Monti’s comment, during the course of a popular politics talk show, Piazzpulita, last Thursday, summed up the campaign’s peculiarities in this respect, very well:

“The purpose of an election campaign, the purpose of elections, is to install a new parliament and a new government; but it is necessary to take the event as an opportunity to assess the state of the country, to carry out a sort of analysis of ourselves.

“Currently, we see the country, from above, bombarded by promises, on the part of more or less all parties, that are totally unrealistic and totally irresponsible, and from below, citizens – that is us – who have a strange attitude: because on the one hand we no longer have any confidence in politics, we no longer trust politicians, but then we are ready to believe everything that we are told and promised.”

So what can we expect once the polls close at 11pm? First, barring major surprises, it will be difficult to translate the exit-poll numbers into a distribution of seats thanks to the complexities of the electoral system, meaning also, that several hours will have to pass before there is any certainty as to the outcome. Secondly, assuming no overall majority for any of the main contenders, it will be several days at least before the composition of the new government is known.

The President of the Republic, Sergio Mattarella, will have to hold consultations with all the parties winning seats and is then likely to confer an “exploratory mandate” on the leader who looks most likely to be able to put together a coalition able to command a majority. He will only confer a “full mandate” once he can have reasonable certainty that the prime minister-designate will succeed in winning the obligatory votes of confidence that have to be held in both the Senate and Chamber of Deputies after the incoming government has been sworn in.

Third, the parties, in making their various promises, have clearly been attempting to ride the tide of popular resentment against austerity, and in some cases channelling it in the direction of Brussels – but in doing so, ignoring the restrictions on their room for manoeuvre imposed by Brussels and membership of the single currency themselves. Watch out for further conflict with the EU institutions and a further growth of Euroscepticism in the months ahead.

Finally, if the winner turns out to be the Five-star Movement, then it will face the additional difficulty that hitherto it has been a movement of protest drawing support from across the left-right spectrum. Whether it will fare well in office, when it will be obliged to make decisions that have winners and losers, satisfying or disappointing those on one side of the left-right divide or the other, is at the very best, a matter of considerable doubt.

So Italy, as usual, faces a highly uncertain future. What seems more certain is that the prospects that would be opened up by yet further popular disenchantment with Italy’s political class, and her weak and fragmented parties, seem grim indeed.