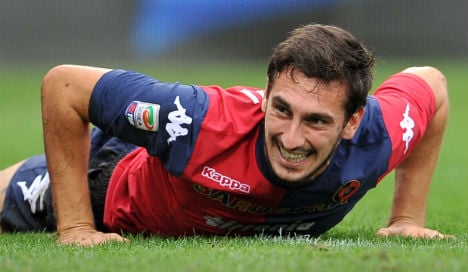 Davide Astori when playing for Cagliari in 2013. Photo: Simone Ferraro / AFP
“Fiorentina are profoundly shocked to have to announce the death of captain Davide Astori after a sudden illness,” the Serie A club said on Twitter.

The 31-year-old, who leaves behind a two-year-old daughter, was in Udine to prepare for Sunday's match against Udinese, which has been postponed according to reports.
The club called on the media to respect Astori's family in what it called a “terrible and delicate situation”.
The Italian league postponed all seven Serie A matches scheduled for Sunday after Astori's death.
The game between Udinese and Fiorentina, where Astori was due to play, had been called off in the morning, as had the early kick off between Genoa and Cagliari, which was abandoned when players learned the news while warming up on the pitch.
The other five games postponed were Atalanta v Sampdoria, Benevento v Verona, Chievo v Sassuolo, Torino v Crotone and AC Milan v Inter Milan.
Url copied to clipboard!