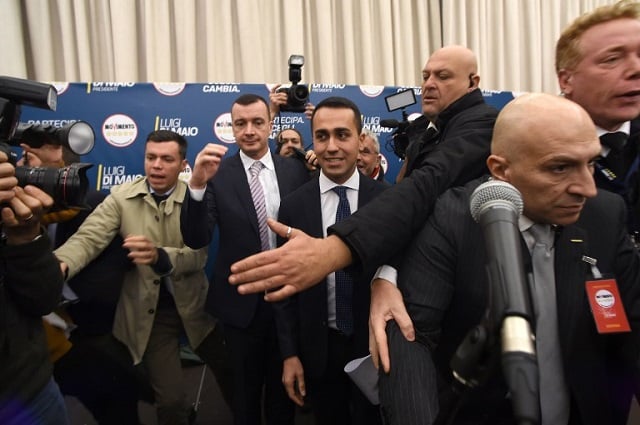 The far-right League party conquered the north, worried about the rise in immigration, while the anti-establishment Five Star Movement (M5S) took the south where concerns about the economy dominate.

“In the south, the Five Star vote was a protest of a part of the country that feels neglected as the economic recovery is only being felt in the north,” said Roberto D'Alimonte, politics professor at Rome's Luiss university. “We can't be surprised that southern regions, where youth unemployment has spiked and traditional parties have failed to resolve the problem, voted massively in favour of a movement that expresses resentment and anger.”

Disillusionment had already made itself felt in a constitutional referendum in 2016 in which southern Italy voted massively against both the proposed reform and then prime minister Matteo Renzi's centre-left government.

Political expert Giovanni Orsina said the election represented a “transition” between the old political order and a new one, delivering “a clear message”.

“It is clear that the two weak links in this phase were the (centre-left) Democratic Party and Forza Italia (Go Italy), Silvio Berlusconi's centre-right party, which have been in power for decades.”

A right-wing coalition including the League and Forza Italia came first in Sunday's vote with 37 percent, but Berlusconi's party was unexpectedly beaten into second place by the League within the alliance.

League leader Matteo Salvini, 45, has positioned himself as “a proud populist”.

“Italy is fed up with champagne socialists,” he said.

With 17 percent of the vote, the party has done particularly well in relatively wealthy areas of northern Italy where concerns about security and immigration are high and euroscepticism is rife. “The most important thing that Salvini says is 'Italians first'. I'm not racist but I think that people who come to Italy should come here to work and not commit crimes or violence like rapes,” Evaristo Bellu, a 56-year-old supporter of the League, told AFP.

Sebastien Maillard, head of the Jacques Delors Institute, said Italians were traditionally europhile. But opinion polls showed “they are very disappointed because they expected a lot more from Europe, particularly a strong immigration policy,” Maillard said.

“There is a strong feeling of being abandoned, a feeling that Europe has left them to their sorry fate on immigration.”

READ ALSO: What does Italy's election result mean for the EU?

For many commentators of Italian politics, the result of the election is a snapshot of a country in the grip of fears about immigration and the economy. The M5S has proposed a universal basic income and a tax cut, while the League wants to help Italian businesses and deport hundreds of thousands of migrants.

“There are definitely policy differences between the Five Star Movement and the Lega (League) and also some of the other populist movements on the right,” he said.

But he added their gains were “a strong signal to the permanent political class in Europe that people, and particularly people in Italy, want change and they want change now.”