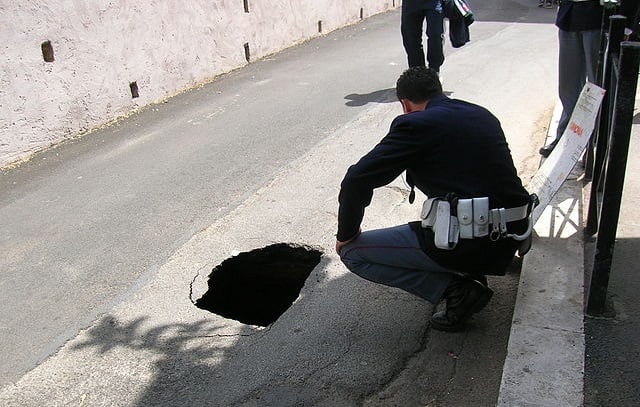 A worker investigates a pothole in the central Via del Pigneto in 2009. Photo: Patafisik/Public Domain

According to an app set up to map the holes' locations, 10,000 potholes have been reported over the past seven years, with 110 appearing in the past month alone.

On Thursday, Rome mayor Virginia Raggi announced a €17 million plan that aimed to fix 50,000 potholes within a month. That works out at approximately 1,500 potholes each day.

Raggi on Thursday described the situation as “exceptional” and said that “timely and urgent repairs” were needed to the city's roads.

A fisherman takes to the streets of Rome as giant potholes open in the roads. pic.twitter.com/P5ac3keZIG

Major streets and smaller roads have all been affected, causing severe traffic jams earlier this week. On almost 30 roads around the city, speed limits have been reduced because of the hazard posed, while bus routes have been deviated to avoid the potholes.

The prosecutors' investigation was opened after consumer rights organization Codacons warned of “an avalanche of compensation cases against city authorities” due to the holes.

According to Codacons' data, one in ten vehicles in Rome has been damaged by the problem, and the organization called on any affected motorcyclists and drivers to contact them for help in claiming damages.

Rome's councillor for public works, Margherita Gatta, blamed the holes on the city's previous administration, which was ousted by the Five Star Movement almost two years ago.

The heavy rainfall followed by snow and ice aggravated the problem because “water penetrated the streets, and then the ice split the asphalt,” Gatta said in a statement in which she added that she was “aware” of the inconvenience the potholes were causing residents.

At the moment, no individuals or possible charges have been named in the investigation.