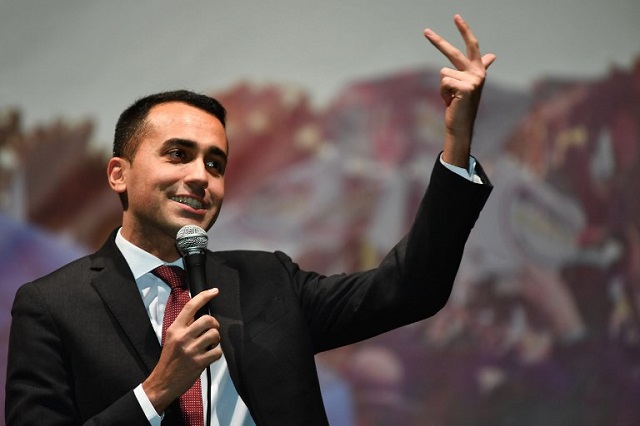 In this hinterland, close to the hometown of charismatic M5S leader Luigi Di Maio, over 57 percent of the population voted for the populist party.

“It was a protest vote,” says 29-year old waiter Antonio Luongo. “People want change, new faces. At this point people in the south feel too let down by our politicians. Five Stars have never governed, why not give them a try?”

Bagnoli was once the lifeblood of the region's economy thanks to its booming steel industry. But in the 1990s the factories were shut down and thousands of workers laid off. The high chimneys of the old steel mill still dominate the landscape, a constant reminder of what corruption and ineffective politics have done to the town. The former industrial site in Bagnoli pictured after a fire in 2013. Photo: Contraluce/AFP

“We're still waiting for the promised reconversion,” says Vittorio Di Capua, a former trade union representative, referring to the numerous plans proposed over the years to transform the defunct site that were never brought to fruition.

“The politicians had other things on their minds… they made so many promises… those in charge of the reconversion stole all the money,” said Di Capua.

Its vows to fight the scourge of corruption in Italian politics, and a promise of a basic universal income for Italy's poorest, particularly resonated with voters in the country's impoverished south. The party cleaned up across the region winning in almost all constituencies and ousting the old guard.

“There is a deep discontent (in the south) due to economic difficulties linked to the 2008 financial crisis which have still not been overcome,” said Leonardo Morlino, a political scientist at Rome's Luiss University.

Italy has struggled to recover from the crisis, with output still six percent lower than it was before it began and rampant unemployment. But nowhere has suffered more than the south.

READ MORE: What the election result tells us about Italy's north-south divide Chiara Lillo, a 28-year-old working in Bagnoli's scientific centre, a modern building which stands out on the rubbish-strewn sea front, says she is lucky.

“I don't think there are many job possibilities for young people here,” she said. “I have friends, acquaintances, relatives who are out of work … I have to say many people I know turned to M5S in this election.”

M5S has promised to cut the salaries of Italy's “fat cat” politicians and redistribute wealth.

“I voted Five Stars because there are too many people in politics who earn too much and do little. Our money funds their whims and not our needs,” said Daniela Lungo, 38, a hairdresser in Bagnoli as she sheltered from the rain during her cigarette break. “We are hoping for change, for something different.”

Roberto Saviano, investigative journalist and political commentator, said the movement “has not given southern voters any solution on how to really start the economy, just banal recipes for the better use of state resources and generic promises to fight corruption. “But it gave them something much bigger: targets to aim at. It has capitalised on frustration, without asking for different behaviour in exchange,” he said in an editorial for national daily La Repubblica.

Falling short of an absolute majority in parliament, M5S needs to make alliances in order to govern — no easy task. But its surge in popularity on election night, above all in the south, has put it in the driving seat to form the country's future government.

“The Five Star Movement had the good fortune to have anger on its side,” said Di Capua. “Rage produced this result.”