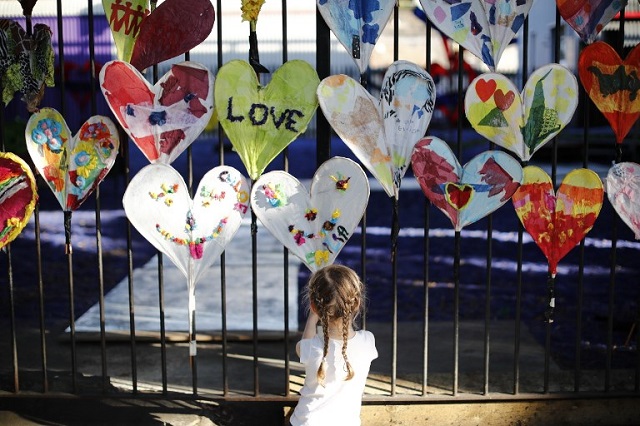 A display of paper hearts outside the remains of Grenfell Tower. Photo: Tolga Akmen/AFP

Marco Gottardi and Gloria Trevisan, both architects in their late 20s, were two of over 70 victims of the blaze in the 24-storey building. Now Gottardi’s mother, Daniela Burigotto, has turned the couple into characters in a fairy tale called ‘Il cavaliere e la principessa’ (the knight and the princess).

In the story, Gottardi is a knight who must save Trevisan, a princess who lives in a tower threatened by a fire-breathing dragon.

However, the new book gives the couple’s story a happy ending, where they live together happily surrounded by butterflies and dragonflies.

“I got rid of the way that Marco and Gloria died, because otherwise I wouldn’t survive the pain. I wouldn’t wish it on any mother,” Burigotto has been quoted by Italian media as saying.

Speaking to Repubblica, she said she chose butterflies and dragonflies as a symbol of the couple because she began to see lots of those insects after the tower block fire, and interpreted them as a sign.

A tweet from La Nuova Venezia shows one of the last pages of the book: “And so she became the princess of the dragonflies, and lived happily with her knight forever.”

Burigotto said she was inspired to write the book by Gottardi’s love of fairy tales as a young boy, and described him as “playful” and “someone who in some ways never wanted to grow up”. The book includes small details from her son's life, such as the teacher who told her “every mother would like this boy as her child”, and her hopes when Gottardi was young that he would become a pianist or surgeon.

The book was created with the help of family friends, including 27-year-old philosophy student Roberta Gattel who created the colourful illustrations. Gottardi’s parents have given 280 copies of the book to children at the Venice pre-school their son attended as a child. So far they have made a total of 1,600 copies, and have also sent a further 400 translations in English to the UK, where they will be distributed at Italian schools.

The book is not the only way they have ensured the memory of the architects lives on: the families have also set up a charitable trust in memory of the couple, Grenfellove. The trust aims to support further education for young people, funding architecture courses, as well as promoting the use of safe building materials.

“Gloria and Marco were so happy and so much in love and they had created so much together in that short space of time, they were living their dream,” an explanation on the trust’s website says.

The couple, who lived in the 23rd floor of Grenfell Tower, had moved to London just a few months before the fire because the English capital offered more job opportunities than they could find in Italy.

They spoke on the phone to their families back in Italy while the building was on fire. Gottardi's father said his son had initially played down the extent of the fire in order to reassure his girlfriend and family members, and labelled his behaviour “heroic”.

Trevisan had thanked her mother for “everything you have done for me”, family lawyer Maria Sandrin said.

Their bodies were not officially identified until almost a month later, due to the severity of the fire, after which their remains were brought to Italy for burial.