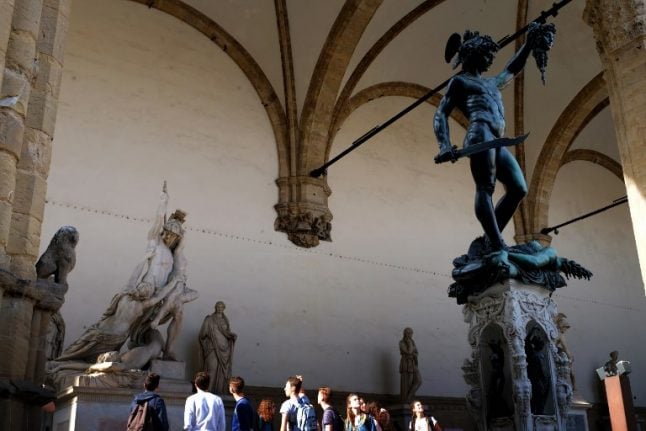 The Loggia dei Lanzi in Florence, where an American tourist was caught relieving himself. Photo: Alberto Pizzoli/AFP

The man, aged 21 and from New Jersey, was spotted peeing on the steps leading to the famous open-air gallery at around 1:30am on Tuesday, according to local news site Nove da Firenze.

He was swiftly stopped and issued a ticket for “acts contrary to public decency”, which carries a fine of between €5,000 to €10,000.

The Loggia dei Lanzi, which houses several valuable classical and Renaissance statues, is monitored by security guards and surveillance cameras.

According to reports, the man relieved himself next to a statue of Hercules fighting the monster Cacus by the Florentine sculptor Bartolommeo Bandinelli, which is at the eastern corner of the Loggia, outside the Palazzo Vecchio in Piazza della Signoria.

The corner of the Loggia dei Lanzi where the man is reported to have peed. Photo: aaron007/DepositPhotos

He is said to be a student holidaying in Florence with a group of friends.

He's not the first tourist to pollute the city's landmarks. In 2014, an American woman was filmed crouching down to relieve herself at a taxi rank in Piazza Santa Croce, while the following summer police fined a Canadian man €400 for peeing on top of Florence's monumental cathedral dome.

That's not to say that only foreigners misbehave: in September 2014 police stopped an Italian man for urinating on the wall of Florence's Santa Croce church, and a photo of a gondolier apparently peeing on one of Venice's canal-side doorways caused outrage when it was shared online the same month.