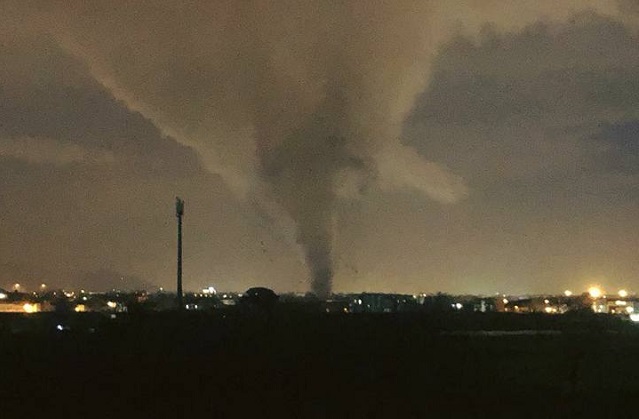 An image of the tornado. Photo: Tornado in Italia

The whirlwind on Monday night also caused severe damage across several nearby towns, uprooting trees and knocking over business and road signs and lamp posts.

The tornado swept across the Caserta area for around half an hour from 7 pm, with wind speeds reaching 220 km/h.

A lorry parked at a service station was upturned by the strong winds, while six parked caravans were also thrown through the air, obstructing part of the nearby A1 motorway. Authorities closed off the affected part of the road to traffic for several hours.

The worst hit areas were San Nicola la Strada, where all eight injuries were reported, as well as San Marco Evangelista, Marcianise, and San Tammaro, the Ansa newswire reported.

Schools were closed on Tuesday in Maddaloni, a Caserta town of around 40,000 inhabitants, while checks on buildings were carried out.