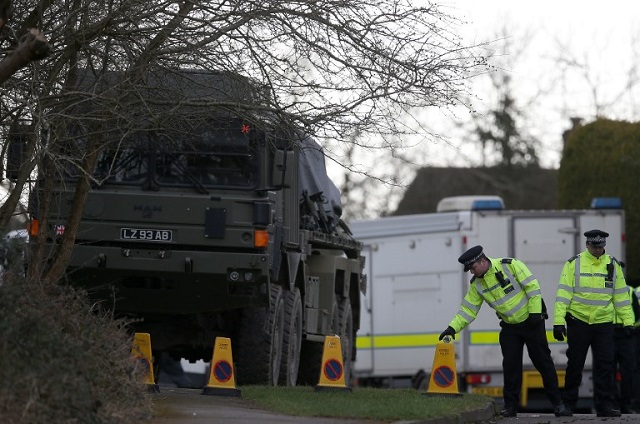 British police and army officers on duty after the attack. Photo: Daniel Leal-Olivas/AFP

Gentiloni, who spoke to May on Friday morning, said the British authorities had Italy's complete solidarity, according to Ansa, which cited government sources. The Italian premier reportedly told May that Italy believes in the “full legitimacy” of the UK's demand for answers from Moscow over what he described as an “extremely grave episode”.

In a brief statement on Thursday evening, which followed a phone call between Foreign Minister Angelino Alfano and the UK's Boris Johnson, Alfano said that Italy was “very worried” by the incident, but made no mention of Russia.

The UK and allies including the US, France, and Germany have said they believe Russia to be behind the attack, in which a nerve agent was used on 66-year-old former spy Sergei Skripal and his daughter in the southern English city of Salisbury.

Both remain critically ill in hospital, while a police officer who attended the scene is also in a serious condition, and more than 500 members of the public were urged to wash any clothes or items they had on them if they were close to the scene.

Alfano's remarks, eleven days after the two Russians were first found slumped on a park bench, were the first official comment on the incident from Italy, which has close ties with Russia.

The language was noticeably less strong than that from the UK and many other EU countries, which have strongly condemned the first use of a nerve agent in Europe since the Second World War and said Russia is likely behind the attack.

“We are very worried by the affair of Sergei Skripal, which put many human lives at risk, and we express our strong solidarity with the British government and population,” Alfano said, according to a ministry statement.

“The use of a chemical agent banned by international conventions on UK territory is particularly serious,” he continued. “We are following the international debate on the affair with high attention and will offer our support to every action aimed at guaranteeing security and the respect of international law.”

Leaders of the UK, US, France and Germany issued a rare joint statement on Thursday saying there was “no plausible alternative explanation” to Russian involvement in the attack.

The UK has expelled Russian diplomats from the country and announced a series of other sanctions, including a World Cup boycott by ministers and British royals, and freezing some Russian state assets.

Prime Minister Theresa May confirmed the country considered Russia “culpable” for the act, while Defence Secretary Gavin Williamson said Russia should “go away” and “shut up”.

Russia for its part has denied any involvement, and Foreign Minister Sergei Lavrov said the country would respond “very soon”.

Alfano told press on Thursday that any response to the attack should be based on “verifiable proof”.

A Kremlin spokesperson in 2016 praised former Democratic Party Prime Minister Matteo Renzi for his role in boosting “active dialogue” between Italy and Russia. Renzi backed the renewal of sanctions against Russia and sought closer economic ties between the two countries during his time in office.

All of the country's other main parties, including those which performed best in the recent general election, also have a relatively pro-Russia stance. Among the most vocal is League leader Matteo Salvini, part of a rightwing coalition that scooped 37 percent of the vote. Last spring, he travelled to Moscow to sign a 'collaboration agreement' with the deputy speaker of the Russian parliament, on behalf of Vladimir Putin's United Russia party.

The Five Star Movement, which emerged as the largest single party in the March 4th vote, has also recently called for closer ties with Russia and opposed sanctions, while Silvio Berlusconi, the leader of the other main party in Salvini's rightwing coalition, has had a close friendship with Putin for decades.