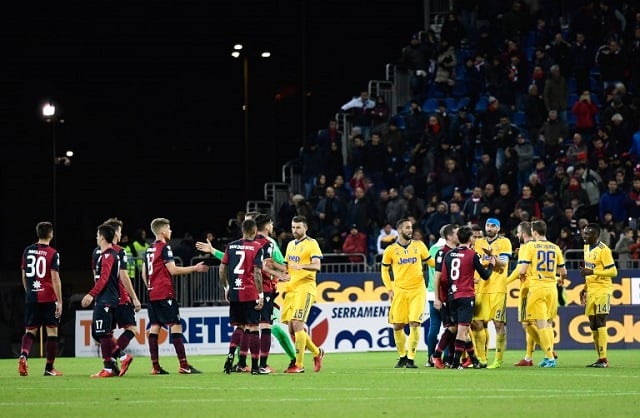 The 19-year-old has attracted the interest of clubs including champions Juventus after scoring seven goals in 19 games while on loan to Serie B side Perugia earlier this season — but his employment in Italy has also attracted criticism and debate in Italian parliament.

He has been valued at €20 million ($24.6 million) by Cagliari and had already signed a contract extension to continue to play for the Italian club until 2022. This was extended until June 2023 on Sunday.

Han himself has said he's “living the dream” in Cagliari, and that he “feels like at home” in the Sardinian capital, despite wanting to improve his Italian language skills.

?? ⚽️ Han Han (19), the first ever North Korean player to appear in Serie A has signed a contract extension with club Cagliari

The striker, who has been linked with a move to Juventus has extended his contract until 2023❗️#Han2023 ? pic.twitter.com/Q8dxLixcvc

Born in Pyongyang, the footballer spent some of his youth at a sports academy in Barcelona before returning to his homeland to join FC Chobyong. He returned to Italy in 2015, playing with Cagliari's academy side before joining the first team last season, making his Serie A debut and scoring his first goal.

So how did a North Korean footballer end up in the Italian league?

It's largely down to Italian senator Antonio Razzi, who has praised North Korean dictator Kim Jong-un as a “wonderful” person and moderate politician. Razzi has previously outlined suggestions for strengthening Italian ties with North Korea through sport and music, suggesting in one radio interview that he hoped to bring Juventus forward Paulo Dybala and pop group Il Volo to the country.

And for the past five years, Razzi has been involved in finding training opportunities for North Korean footballers in Italy. The politician travelled to North Korea for a controversial visit in 2014, accompanied by League leader Matteo Salvini, entrepreneurs from the tourism and agricultural industries and football talent scouts. It was on this visit that Han was spotted.

But the signing of North Korean players is a controversial issue in Italy, not least because workers overseas, including athletes, are expected to hand over a large proportion of their salaries to the North Korean government, according to numerous reports.

Questions have twice been raised in Italian parliament over the ethics of this possible funding of North Korea, which is regularly ranked as having the worst human rights record in the world. Both Perugia and Cagliari have responded by saying they pay Han's wages directly to him, into a personal bank account, and that it's not their responsibility to check what players do with their pay.

In September last year, Han was reportedly stopped from giving an interview on Italian TV. The footballer burst into tears after receiving a phonecall from Pyongyang ahead of a scheduled appearance on Italy's state broadcaster, according to La Stampa.