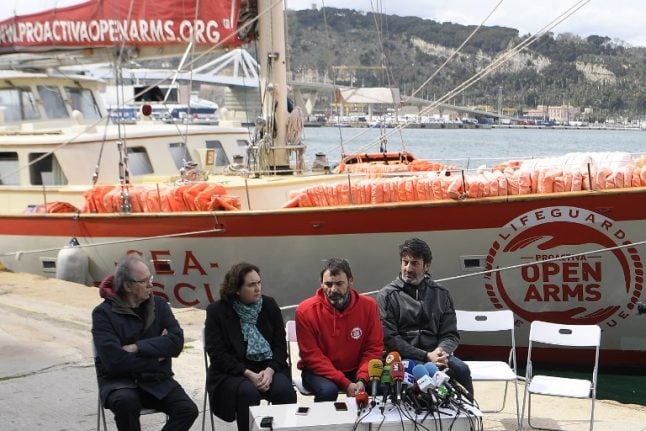 Proactiva's rescue ship was being held on court orders on Monday in the Sicilian port of Pozzallo, where it arrived on Saturday carrying some 200 migrants that it had picked up from hazardous dinghies in international waters off Libya.

According to the Italian coast guard, Libyan authorities are responsible for patrolling the area and taking in people rescued there, under a migration agreement between Italy and Libya designed to reduce the number of crossings from North Africa to southern Europe.

Having gone to the aid of two vessels in difficulty on Thursday and taken 218 people on board the Open Arms, Proactiva refused the Libyan coast guard's orders to hand over the migrants. According to the aid group, Libyan guards threatened to kill their crew if they did not surrender those rescued, who included women and children.

Instead the Spanish ship sailed for Sicily, in what Italian prosecutors say was part of a deliberate plan to bring the migrants to Italy.

They accuse the ship's captain, one of its coordinators, and the founder of Proactiva, Oscar Camps, of “criminal association and encouraging illegal immigration”, Camps said on Twitter, adding that no charges had yet been filed and the seizure of the ship was a precaution.

“Preventing the rescue of lives at risk on the high seas in order to forcibly return them to an unsafe country – as is Libya – is equivalent to carrying out a 'hot return' [immediately and summarily expelling migrants] and contravenes the UN's refugee convention,” he tweeted.

The group was not aware that the zone in question was under the Libyan coast guard's authority and did nothing wrong, one of its lawyers told Reuters. According to another Proactiva spokesperson, the Italian coast guard asked the NGO to go to the migrants' aid in the first place.

However, Italy's coast guard stated that international norms usually require ships to wait for their country of origin to arrange where migrants rescued at sea should be taken. The Open Arms sailed for Italy while still awaiting directions from the Spanish government and despite the fact that it was closer to Malta at the time, the coast guard said. Proactiva was one of only a handful of NGOs that has agreed to sign the Italian government's code of conduct on migrant search and rescue operations in the Mediterranean, which imposes conditions including that ships must have an Italian police official on board and that NGOs cannot sail into Libyan waters unless lives are at risk.

Italy seized another rescue ship, the Iuventa, in August on similar allegations that the German NGO that operates it, Jugend Rettet, had facilitated illegal immigration. The ship remains impounded in Lampedusa, despite the group's efforts to get it back.

More than 600,000 migrants are believed to have reached Italy by boat in the past four years, though arrivals fell by 34 percent in 2017, according to the EU border agency. The drop is largely attributed to Italy's accord with Libya, which has seen the Libyan coast guard assume responsibility for a large part of rescue operations.

According to the United Nations Refugee Agency, migrants face appalling conditions in Libya. A 22-year-old Eritrean, rescued at sea by the Open Arms ship last week after spending 18 months in detention in Libya, died from severe malnutrition just hours after landing in Sicily. Migrants are checked by a doctor at Pozzallo port in August 2017. Photo: Angelos Tzortzinis/AFP