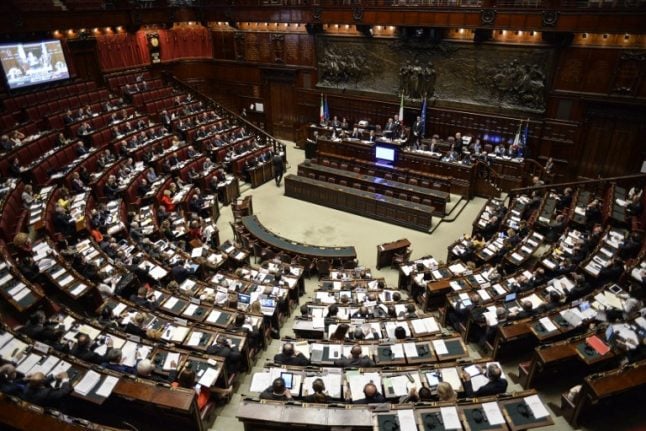 Italy's chamber of deputies in session in 2015. Photo: Andreas Solaro/AFP

Two weeks after Italians voted, Italy's 315 newly elected senators have been registering at the houses of parliament in Rome since Monday and the 630 new deputies began registering on Tuesday, in preparation for the first session of Italy's 18th parliament this Friday.

Is the 18th any different from the 17th? Quite a bit. Even aside from who's in power, there are a number of novelties this time round.

Here's a round-up of what's new in Italy's latest parliament.

Let's start with the numbers. A few seats in both houses have yet to be assigned, but in the Senate the four-party centre-right bloc has the most confirmed seats (135), followed by the Five Star Movement (M5S) with 112. The centre-left has 57 seats and the left-wing newcomer Free and Equal (LeU) has four. The biggest gains were made by the M5S, which nearly tripled its seats across both houses from 123 to 333; and by the League, which went from 33 seats to 110. The worst performer was the Democratic Party, which lost 209 seats to take it to a total of 169.

Given the M5S's drive to elect “outsiders”, not career politicians, their gains have had a considerable impact on the demographics of Italy's parliament.

The median age in Italy's Senate – which candidates must be at least 40 to enter – has fallen to its lowest ever: just over 52, according to Rai News. The Chamber of Deputies, or lower house – minimum age 25 – is even younger, with a median age of 44.

The babies of the bunch are Alberto Stefani, a deputy for the League who turned 25 just four months ago, and Senator Francesco Laforgia of Free and Equal, who celebrated his 40th birthday last month.

Women make up around 34 percent of the new legislature, the highest proportion yet. It's an improvement on 31 percent in the last parliament but short of the target set by Italy's new electoral law, which said that 40 percent of parties' top candidates had to be female. Since parties were able to put the same candidate at the head of several lists, however, the requirement didn't translate directly into seats.

This parliament includes Italy's first ever black senator: Toni Iwobi, who represents the League. A naturalized Italian citizen born in Nigeria, Iwobi made a name for himself by helping to shape the party's anti-immigration platform. Matteo Renzi, the former prime minister who led the Democratic Party to a humiliating defeat, may be resigning as party leader but he'll be taking a seat in the Senate, representing his home town of Florence. Meanwhile Matteo Salvini, who steered the League to unprecedented electoral gains, is also entering the upper house as senator for somewhere very far from his home town – Calabria (he's from Milan).

Other familiar faces include Italy's longest serving legislator, Democratic senator Pier Ferdinando Casini, elected for the tenth time after 35 years in parliament; and doyenne of the left Emma Bonino, who's beginning her ninth term. And making his comeback after a five-year absence is Umberto Bossi, co-founder of the Northern League since rebranded by Salvini; he first took a seat there in 1987.

At least, not in a political context. Most of Italy's senators – 64 percent – are new to parliament and around a third have never held office before at any level.

Across both houses, many new legislators didn't start out in politics: there are around 80 lawyers, 30 journalists and 30 or so doctors, not to mention academics, accountants, teachers, a farmer and a champion sailor, among others. The Five Star Movement is largely responsible for the new blood: it deliberately selected candidates who had never held office before, even striking off some who were found to have held local posts.