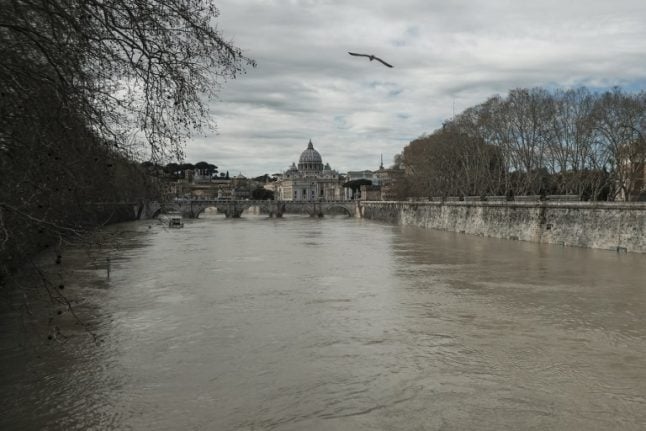 A vortex of low pressure over the Mediterranean is sucking in cold air from the north east and creating stormy conditions, particularly over the east and south, that are expected to continue into the weekend.

While today Rome saw some welcome sunshine on Wednesday, the Tiber river has risen dramatically after weeks of heavy rain, and the local Civil Protection Department closed off stairways that lead down to the banks. In Livorno on the western Tuscan coast, all schools, public parks, and care home day centres were closed for the day on Wednesday, while the entire region was on orange alert for strong winds until 5 pm on Wednesday.

Florence, too, was on orange alert, with public parks closed amid warnings of gusts of up to 60 kilometres an hour on higher ground.

Sardinia was under a yellow weather alert, and while winds had slowed, the island was affected by heavy rains on Wednesday. Around 20 millimetres of rain fell on average, a figure which rose to 40 millimetres in some areas.

Meanwhile the centre of Italy had up to 10 centimetres of snow. Several towns in Isernia province in Molise ordered schools closed after heavy snowfall overnight.

The east coast was battling both snow and rough seas. Beaches in Le Marche region were bashed by strong waves while further inland, around Urbino, a state motorway was temporarily closed as people abandoned their vehicles because of the snow.

Snowfall was also reported on Wednesday in parts of Abruzzo, Emilia-Romagna, Umbria, Lombardy and Piedmont.

There was a chance of seeing Mount Vesuvius turn white again for the second time in a month as forecasters warned of snow in the southern Campania region, on the famous volcano and even some areas at lower altitude. The region is also at risk of storms, rough seas and strong winds, prompting a yellow weather alert.

Even Calabria and Sicily could see snow on Thursday as the south continues to bear the brunt of the bad weather. Temperatures are forecast to rise in the north from Friday, though it will likely remain colder than usual everywhere right up to the Easter weekend.

It's not just us feeling the chill: the unusually late cold snap has wreaked havoc on Italy's farms. According to farmers' association Coldiretti, as much as 20 percent of some vegetable crops have been lost, as well as swathes of fruit and olive trees.

The 2018 winter will end up costing Italian agriculture at least €300 million, the association says.