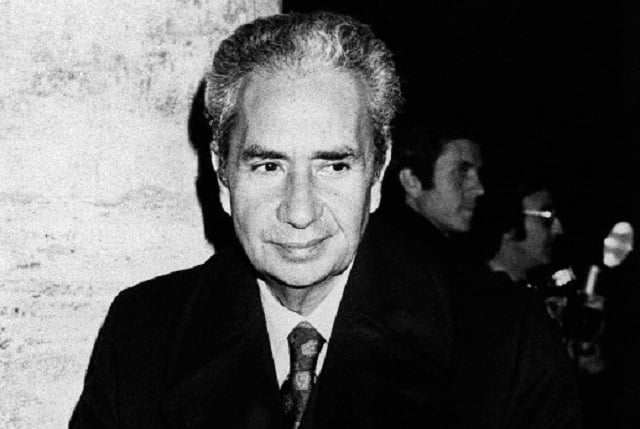 The memorial in Via Mario Fani, the north-western Rome street where the two-time former PM was ambushed and five of his police escort killed on March 16th, 1978, was discovered at around 2 am painted with the letters BR in red.

The initials refer to the Brigate Rosse or Red Brigades, the armed group that took Moro hostage in revenge for his role brokering a deal with Italian Communists to back a new government led by Christian Democrats.

The area has been blocked off and carabinieri are investigating.

Nicola Zingaretti, the president of the Lazio region where Rome lies, called the graffiti a “cowardly and shameful act”.

It had been cleaned off by Thursday afternoon, according to city mayor Virginia Raggi.

The monument, which also commemorates the five police bodyguards murdered, was inaugurated six days ago by President Sergio Mattarella in a ceremony attended by politicians and police officials.

Last month, while the memorial stone was being installed, vandals wrote “Death to police” and painted a swastika on the base of the monument.

Relatives of the police victims called that graffiti “an insult to all the servants of the state who lost their lives defending the backbone of democracy in this country”. The body of a police officer, in front of the black limousine from which Aldo Moro was kidnapped in 1978. Photo: AFP

The Red Brigades were responsible for many violent incidents in what is known in Italy as the 'Years of Lead'.

They accused Moro of being the architect of the “historic compromise” that led to the Italian Communist Party (PCI) lending support to a government led by former centre-right Christian Democrat premier Giulio Andreotti, and of failing to get imprisoned terrorists released.

After holding him hostage for 55 days, the group shot and killed him, leaving his body to be found in the boot of a parked car.

Speaking on the 40th anniversary of Moro's kidnap, Italian Prime Minister Paolo Gentiloni called it “the gravest attack on the Republic”.

Some details surrounding Moro's murder have never been fully cleared up, and within Italy a whole host of theories have sprung up as to why he was targeted.