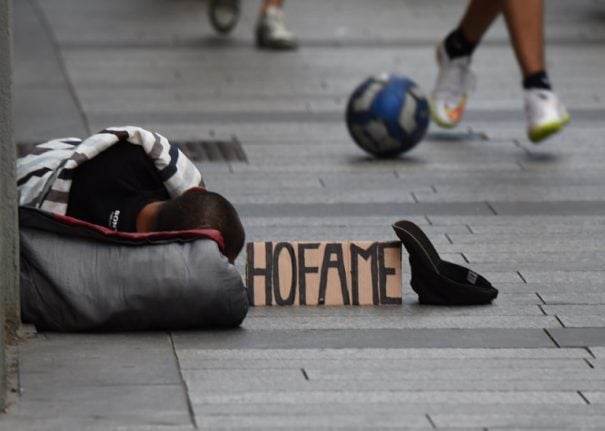 A man sleeping rough in Rome, with a sign that says: "I'm hungry". Photo: Giuseppe Cacace/AFP

Prime Minister Paolo Gentiloni has officially tendered his resignation after his centre-left government was defeated in the March 4th general election, but he is continuing to run day-to-day affairs until a new administration can be formed.

And presenting a report on how the so-called “inclusion scheme” or REI has performed so far, Gentiloni said that the monthly allowance for people in financial difficulty was actually working.

Under the REI scheme, payments range from €190 for a single person to €540 for households of six or more.

“Three months after its launch, we can say that the inclusion scheme works,” Gentiloni told a news briefing.

“We know that this is an important step, but we must continue by reinforcing it with new resources.”

Gentiloni said that some 316,000 people have have already benefitted from the REI. And from July, that number will be gradually expanded to eventually reach 2.5 million people. The government has earmarked €2 billion for funding in 2018.

In January, Italy's unemployment rate was 11 percent, according to figures from national statistics agency Istat, above the eurozone average of 8.6 percent. The jobless rate for the under-25s in Italy stood at 31.5 percent.

According to Istat, 4.7 million Italians were living in poverty in 2016, a nearly threefold increase from the 1.7 million recorded in 2006.

REI is similar to systems of income support – such as the RSA in France – that have long existed elsewhere in Europe but its introduction is a first for Italy.

READ ALSO: Italians demand M5S basic income – even though the party's not in power

It also has similarities to the basic income promised during the election campaign by the Five Star Movement (M5S), which became the largest party in Italy's hung parliament after the election.

Under the M5S proposal, €780 would be paid monthly to the unemployed, while those who each month earn less than that sum, considered the poverty line by Istat, will receive a top-up.

In all, it would benefit nine million people, a much larger base than the one the current government is targeting with REI.