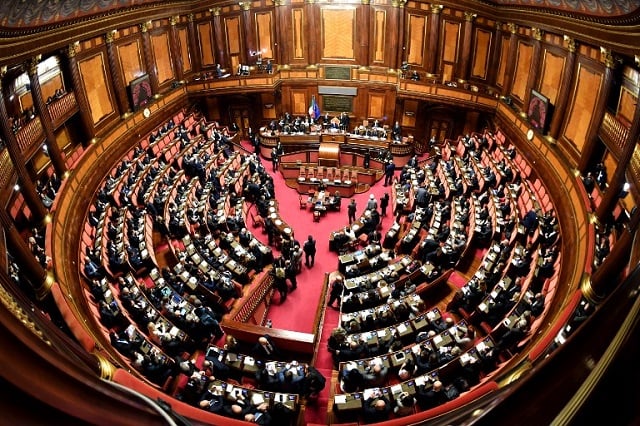 A general view of the Italian Senate in March. Photo: Andreas Solaro/AFP

Two major forces emerged at the polls: a right-wing coalition led by the far-right, anti-migrant League party which garnered 37 percent of the vote, and the anti-establishment Five Star Movement (M5S), the biggest single party with just under 33 percent.

Each group has repeatedly spoken of its right to be given the chance to form a government and both have stuck to that line despite coming to an agreement last week on the nomination of the speakers of both houses of parliament. Both political groups are making hostile noises in the lead up to consultations with President Sergio Mattarella.

On Tuesday night current affairs programme Di Martedi, M5S leader Luigi Di Maio said that he would only deal with either the League or the centre-left Democratic Party (PD), which leads the outgoing government and crashed to third at the election with around 23 percent, haemorrhaging seats. Any deal with Matteo Salvini's League must, Di Maio says, exclude Silvio Berlusconi's Forza Italia, the second largest party in the right-wing coalition and a fierce rival to the M5S.

“Salvini needs to choose between revolution and the restoration. Whether to leave Berlusconi and change Italy or whether to stay with him and not change anything,” said Di Maio.

Salvini responded on Facebook by saying that, unlike the M5S, the League “excludes any alliance with a PD rejected by the Italian public,” and reiterated that the right will discuss a partnership with Di Maio “but without being subjected to vetoes or impositions.”

In any case, both will have to make their cases to Mattarella.

Over the next two days Mattarella will meet the Chamber of Deputies and Senate speakers and political leaders for consultations over the make-up of the next government, with the biggest parties pencilled in for Thursday.

After his consultations the president will decide who, if anyone, can command enough seats to form a government or whether a fresh round of consultations is necessary.

Finding a solution this week will be a tricky task given how far anyone is from a majority in either the lower house Chamber or upper house Senate. The right needs 51 more seats in the 630-seat Chamber and 23 in the Senate — which holds 318 seats — in order to form a stable majority, while the M5S need to secure the support of 94 more in the lower house and 51 in the upper house.

The PD has refused to work with either the right or M5S despite having enough seats — 111 in the chamber and 52 in the Senate — to form a government with either.

Interim PD leader Maurizio Martina said on Tuesday that his party won't “act as a crutch” for two groups that have such different political ideas from his own party.

PD MP and deputy speaker of the Chamber Ettore  Rosato claims the two other groups were just using the threat of an alliance with the PD to gain an upper hand in their private negotiations.

“There's been a concrete agreement for government between Di Maio and Salvini for months. Now they're just stalling,” he said on political talk show Porta a Porta on Tuesday.

Little seems likely to change on the PD's part at least until the party votes for a new leader, which Martina has said should take place this month. If an agreement between the League and the M5S is not struck and the PD sticks to its guns a new government will be extremely hard to form.

But even if Mattarella were to announce new elections there is no guarantee anything would change, unless a new electoral law were drafted. Federico Fornaro, MP for left-wing party Free and Equal and an election expert, told Wednesday's Il Fatto Quotidiano daily that Italy would remain in political limbo.

“With the current electoral system, going back to the polls would be pointless,” he said.